Itinerary of the Via San Francesco 2013.

This was a wonderful camino, walked over two weeks in late May 2013 with Jacqueline, Sebastian and Andreas, three friends from Camino de Santiago 2011. They’re a fun bunch and it was a joy to share with them. To read our story from the beginning, start here.

Our biggest challenge was lack of adequate guidebooks in English. There’s a somewhat dated (2010) German guidebook, which Sebastian brought with him, but otherwise we depended on websites that covered only portions of the path. They seem basically to be divided by province, with a few sites describing the trek in Umbria and others describing the way through Lazio. And the path wasn’t exactly straight, either. The traditional St. Francis walk starts in Assisi and ends in the Rieti Valley, making a loop between Pogglio Bustone and the town of Rieti. So with this walk we cut through the St. Francis loop and headed to Rome. And of course, Rome never disappoints!

The main sites that have maps and guides are:

That’s a lot less info than for any other camino I’ve ever taken. So. . . . .  the iPhone and Google Maps kept us out of trouble some of the time. A small price to pay for a truly beautiful walk.

Jacqueline and I in the Vatican after a successful adventure acquiring our Testimonia. 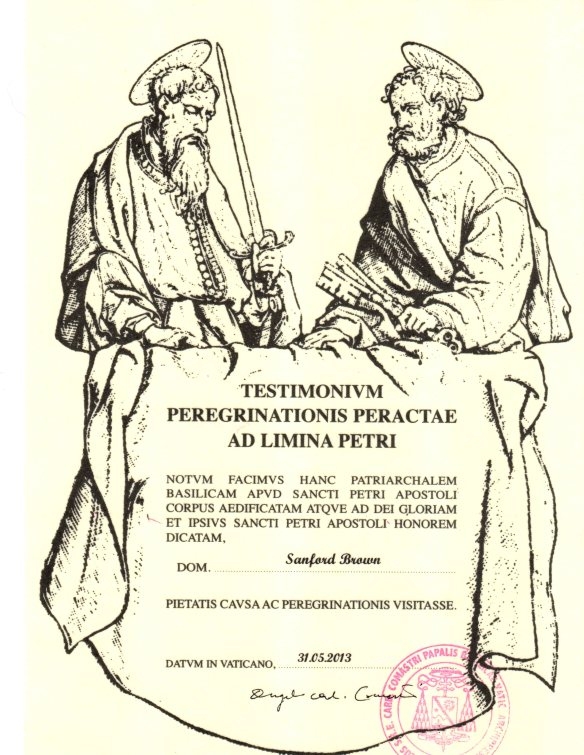 Testimonium from the Vatican following our 2013 Cammino di San Francesco