Last night Luke finally arrived at about 20:00 with Gal and Lila. They were unworried about a bed for the night, so it was just as well that Rocky had reserved at the Palo Avellano. They were appreciative and we threw our packs onto the beds and headed for the albergue dining room for a nice pilgrim dinner. 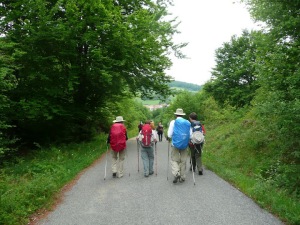 Monique, Roberto and Martin (plus another woman) from behind near Larrasoana.

Woke up at 06:00 after a good night’s sleep and had breakfast with several French folks. Good spirits all around. Discovered I had left my boots at another albergue we’d investigated and was very concerned until I saw them through the window of the other albergue. Waited for the albergue to open and grabbed my boots. Left Zubiri at 08:00ish in light rain.

Walked briskly to Larrasoaña, enjoying a brief conversation with Monique of Switzerland. Between Zubiri and Larrasoaña are many good gravel paths through woods. After Larrasoaña the paths have been “improved” into concrete sidewalks which now were very slippery due to rain.

I saw man with blowing parka on road ahead and helped him pin it down as I passed. Francisco was his name and we had a good, long conversation about literature — he loves to read American lit in Italian. His billowing parka is an example of how the apparent advantage of parkas turns into a disadvantage with the least bit of wind.

Left him at a rest stop where I met Renee, my clergy acquaintance, and her friend Carrie. Also there was Kat of UK from the Forum and her mother, Joanne. I left some time after Renee and passed her on muddy path above the rest stop. Continued on and met 3 Japanese men, one with a Mt. Rainier medallion. Then on to Pamplona.

Had made arrangements with Luke and Rocky to meet at Pamplona City Hall at 20:00 to share hotel reservation plans and meet for dinner. Got to Pamplona early (14:00) and walked around, trying to find Internet w/o luck. Heard whistle across Plaza de Castillo and saw Rocky and Luke — somehow they’d both beaten me here, though I’d never seen them pass me. I learned later that Rocky had taken a bus partway and Luke had hitchhiked from Larrasoaña due to his bad need.

Rocky had taken a bus to Pamplona and Luke had hitched a ride from Larrasoana after injuring his knee from walking. We started work on getting ibuprofen for Luke but all the drug stores were closed. We found one and got his drugs. Had 21:00 dinner with Luke and Gal and Lila at great vegetarian restaurant and saw Francisco there. Off to bed at a hotel Rocky had found. Ahhhh, rest. I slept very well.

Monique, Roberto and Martin (plus another woman) from behind near Larrasoana.

Path into old city of Pamplona past city walls.