Day Twenty: La Caridad to Ribadeo — As Martin and I crossed the highway bridge above the Rio de Ribadeo into Galicia this afternoon I had mixed feelings. I knew the next town, Ribadeo, would be the last coastal town we’d visit on this walk and that the crossing meant a goodbye to the sea and its many beautiful beaches and vistas. I thought back to the states of Cantabria and Asturias I’d crossed, and the Basque Country where I’d begun with Sebastian and felt sad that this crossing also meant the beginning of the end to this journey. Santiago is now just eight days away and most of this month of walking and adventure, like the sea, is now behind me.

This morning I lingered over breakfast at La Caridad out of enjoyment over the nice hotel, the Casa Xusta, I’d stumbled into the night before. My gear was mostly dry after yesterday’s downpour and I was physically ready to push myself out the door, but the hotel’s breakfast of cereal, yogurt, toast, jam, fresh orange and coffee — with linen napkins — was too luxurious to rush. I trusted that Martin wouldn’t mind much if I were a few minutes late to the train station in Tapia where I was to meet him at 10:45.

At 9:00 I set out from the hotel wearing my rain jacket which before long was back in my pack. There was a very light drizzle falling, but the temperature was moderate and the high clouds to the west suggested the rest of the day would likely be dry. I began walking briskly as I realized the distance involved and my relaxed pace at breakfast would mean I’d now be quite late for Martin.

I skipped the camino trail and walked the N634 out of town for the sake of time, then at Porcia I opted for the camino trail as it headed toward the coast in order to see if I could catch some vistas of the ocean. I stayed on the trail through El Franco where it turned to asphalt and appeared to make a straight line to Tapia.

About 4 km before Tapia I saw a man on a bicycle approach. He slowed down and asked me where I was going today. I mentioned Tapia then Ribadeo and he gave me detailed directions about how to get there. I asked him where the train station was in Tapia and he frowned, “it’s 5 kilometers away. Why?” I explained that I was to meet my friend there. “No, he should just take the train on to Ribadeo where the station is right in the city.” He then rode off and I began to puzzle about how I would meet Martin if his train were leaving him 5 km (3 miles) away from the city.

Soon the man returned from the opposite direction and told me he’d show me the way into town and get me a cup of coffee while I waited for Martin. As we approached the town he walked me through the open air market, where everyone seemed to know him. Then he walked me down to a nice cafe overlooking the harbor.

As we talked over coffee (in his excellent and my broken Spanish) I learned that is name is German (pronounced Herr-MON) and that he is a local merchant seaman who’s been unemployed the last four years. Then as we waited for Martin I explained about my blog. The cafe owner opened his laptop and I walked them through the last several days’ postings and photos, including the church fireworks from yesterday, which he identified as San Antonio Day. He explained that fireworks are just part of how Spaniards celebrate and it’s no big deal.

Soon Martin called, so German and I headed up to the Plaza Mayor to find him. Once there, we headed back to the cafe for empanadas de atun, coffee, and photos. Before we left, German excused himself and returned after a bit with a backpack and two colorful bandanas from his hiking club, one for Martin and one for me. With him was the president of the Grupo de Montanas. We were now honorary members of his august fraternity!

Since German also had his backpack we realized he was also planning to escort us out of town, perhaps all the way to Galicia!

He walked us along the cliffside promenade to show us his town’s lively beaches, then said a cheerful goodbye as the trail turned away from the beach. We were thankful for his friendly welcome to Tapia and the bandanas we knew would impress our friends.

After a few km Martin and I shared the cherries and nectarine I’d purchased at the market and then a few km later we heard the sound of a motor scooter approaching. Who should it be but German, this time bearing more gifts of stickers and his email address so we could contact him once we arrived in Santiago. He said his final goodbye from a chapel in a park high above the Rio Ribadeo from which we could see the towers of Ribadeo, our goal for the night.

The highway bridge crossing into Galicia was just a few minutes away now, and German’s friendliness was a reminder of how kind and helpful all the local Asturians had been all throughout the walk. They frequently volunteered directions and always offered a hearty “buenos dias” or “buen camino” or “buen viaje” as we passed them on the street.

After crossing the high bridge (an act of courage for Martin) we settled into our first Galician albergue, found a cafe, and planned our dinner for later in the evening.

Martin’s knee is still hurting him, so he’ll likely take a bus a few days ahead, once again to give it time to heal. I’ll keep walking — away from rather than along the sea — to see my beloved Santiago soon, then my loved ones and home. 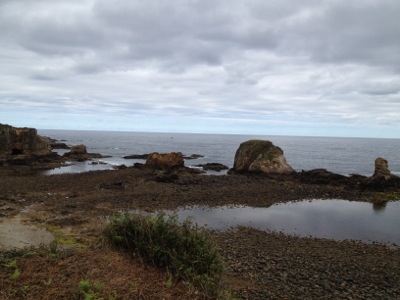 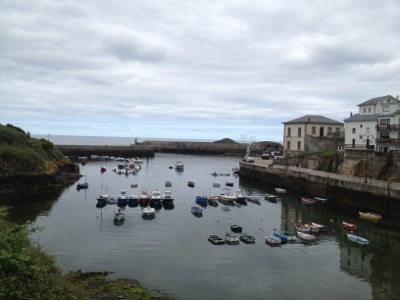 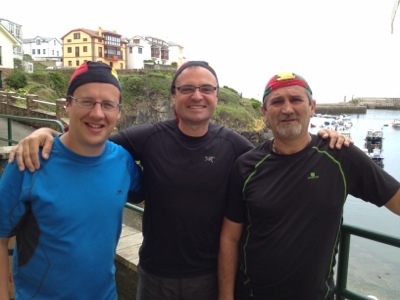 From left: Martin, me, German.

German and Martin leaving Tapia on cliff side promenade.

View of Ribadeo and Galicia from high bridge over town.

2 thoughts on “Goodbye to the Sea”