Day Twenty-two: Lourenza to Gontan — As I came into town last night I looked briefly for a pension or hotel for the night, but the one pension I saw looked a little dicey, so I opted for the albergue. It was a modern building with about twenty beds in three rooms and it worked out to be perfectly comfortable for the evening. It didn’t bother me to share the two man shower with a skinny Italian fellow whose name I didn’t get.

Albergue (al-BEAR-gae) living takes some getting used to. There are often many languages spoken as clothes are washed by hand in the outdoor washing sinks, showers taken, and meals cooked in the kitchen, which usually serves as the hub of activity in the evenings. Galician albergues are usually quite nice, as though a government contract was let out to young architects and they were challenged to design something that would be useable and, hopefully even, attractive. The albergue of Lourenza is perhaps 25 years old now, but it has “good bones.” Timber rafters and wood paneling, stone faced walls, and other subtle traces make an observant pilgrim thankful that someone, somewhere cared about footsore and weary walkers slowly meandering through their land.

I ate at a bar/cafe last night so I missed some of the communal life of the albergue, but I slept very well and felt full of energy as I met Julian this morning in the Plaza Mayor at 7:00. We stopped for a quick coffee, then headed onto the camino and up the steep climb behind the albergue for a view to Lourenza below.

Today would be a day of climbing as the topography changes from coastal hills to a higher, flatter region beyond. In between is a ridge of 1500 meters in height, our last big climb of this camino.

About 8 km from Lourenza the mid-sized town of Mondonedo appeared and we scheduled our mid-morning coffee break for a cafe as near the cathedral as possible. Both Lourenza and Mondonedo sport impressive church buildings and as we had coffee — accompanied by a delicious chocolate croissant for me — I strategized about how to get inside Mondonedo’s impressive main church. Julian and I scouted around all the doors we could find, then just as we were about to give up we noticed a priest unlocking the main door off the plaza. Score!

I introduced myself as a Protestant priest (it seems easier for Spaniards to understand than “pastor” which still literally means “shepherd” in Spain) and he graciously invited us in, showed us the cloister and described the reredo. The only thing that could have made me happier would have been to have a go at the vintage organ hanging from the nave walls at the clerestory level, but that was a lot to ask this kind priest and I suspected the organ has not been played for many decades.

Having now inspected and approved the church it was time to head up the hill for today’s big climb. Julian was perfect walking company and we chatted almost nonstop on the asphalt then gravel road until we reached the summit, about 11 km after Mondonedo.

With the difficult work of the day now done it became purely a matter of finding lunch and a place to spend the night. We walked along the new freeway construction for a bit and then, about 90 minutes or so after hitting the summit of our climb we were in Gontan, our goal for the day.

After a quick beer and omelette at the first bar/cafe, we found the Gontan albergue, an even more modern affair than its Lourenza cousin. With a nice kitchen, dining room, showers and living room it’s a pilgrim gem. Albeit there are 28 beds in the single dormitory, but this is as luxurious as an albergue gets. Julian is a light sleeper, so even the nicest albergue doesn’t work that well for him. He chose a room above a nearby restaurant instead while I registered at the albergue, met a couple of Michigonians (Midwestern American sounds oh, so much like home) and threw my pack on a bunk.

I washed my clothes, showered (by chance with the same skinny Italian guy from last night’s shower and whose name happens to be Matteo) and settled in for an evening as comfortable as you can find in Europe for 5€ (about $6). 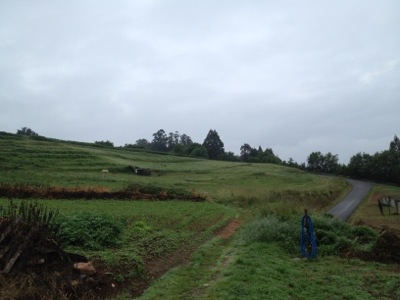 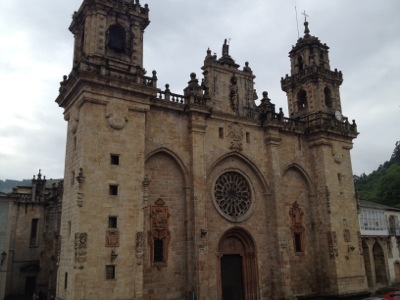 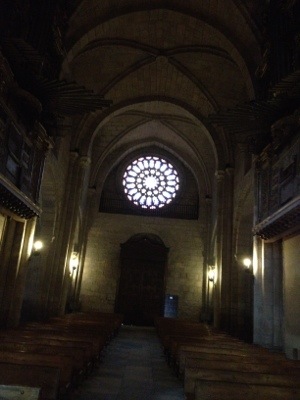 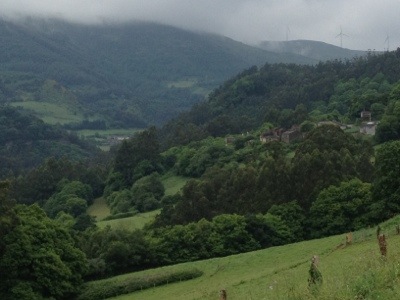 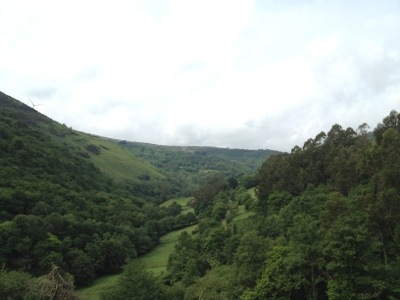 How green is their valley. 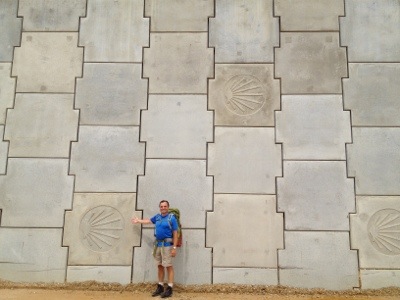 A freeway bulkhead on the A8 now under construction. Includes scallop shell designs. Julian is a real photographer as you can tell. 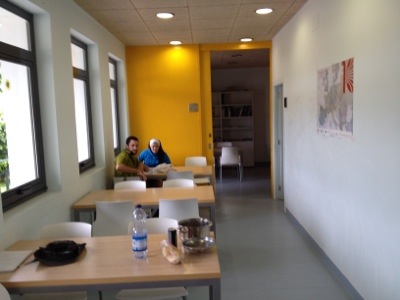 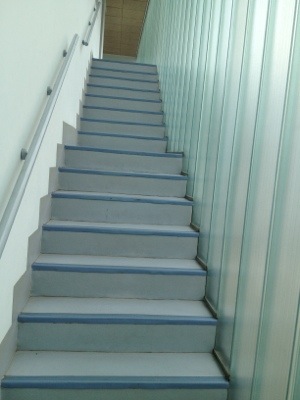 Can’t get over this cool albergue stairway with the glass wall. 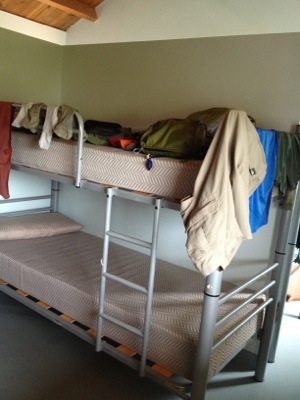 Five Euro bed in the Gontan albergue. OK, I choose the top bunk because I don’t like someone sleeping over me (but don’t mind sleeping above someone else). 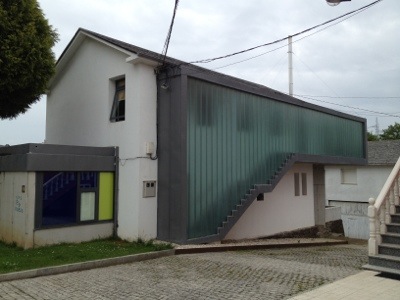 Albergue stairway from outside. 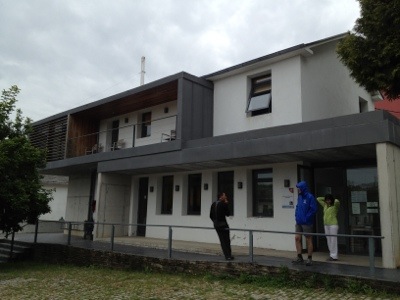