Today my head wants to explode — so much information about the Italian language in so little time.

The day began at the usual hour — 4:00 a.m. when for some reason I’ve been waking up. This time I managed to force myself back to sleep, and I reawakened at 7:00, refreshed and ready to begin the day. The rest of the apartment — including my hostess Graziella and my two fellow students Thomas and Flavia — was still fast asleep. I caught up on a Facebook argument I’m having with an atheist back in Seattle and then headed to the showers after I started to hear people stir. After my shower Grazielle had a breakfast of toast, cake and peanut butter ready (no Nutella®), which I washed down with a caffe latte.

School secretary Giulia waves from behind the Comitato Linguistico desk.

After breakfast I went back to my room to see if I could catch Theresa at home while she was still awake. We talked on FaceTime and it was great to see her face and hear her voice. By the time we were finished, Thomas was ready to head to school, so we walked down the hill together to Comitato Linguistico, our language school, Thomas leading the way.

Comitato is housed on the fifth floor of a 1970’s era office building just above the main Perugia bus station, and its quarters are cozy, modern and friendly. I met Giulia, with whom I’d had several email conversations over the last months, and was oriented by Frederika, the owner. She showed me around and described the optional excursions students can take. I signed up for every one, including a city tour this afternoon, a bike trip to Lake Trasimeno tomorrow, a stained glass restoration tour Wednesday, a wine tasting Thursday and an Italian movie on Friday — so many excursions that I had to mark them in my iPhone calendar. After finishing this task I discovered my class wouldn’t start until 10:00, which gave me time for a second breakfast at a nearby cafe.

When I came back I met my first teacher, David, a friendly young Perugian. My fellow students in class are a young Dutch woman, Patricia, and an American woman from Fresno, Delia. She seems to have a lot more Italian than Patricia or me, so today’s lessons were elementary for her, challenging for Patricia and me.

David and me with our grammar book.

David walked us through some basics. Pronouns, conjugation of “to be,” a couple of prepositions, and some vocabulary — all in one hour. In our conversation time the first question in Italian was “where are you from?” followed by “how old are you?” and “where do you work?” The first question was easy. My answer to the second question led to some surprised looks, which I took as flattery. The answer to the third question was the one I’m still trying out. “Sono scrittore” (I’m a writer). Then I described my plan to write a guidebook, to walk from Florence to Rome, the address of my blog, etc.

At 11:00 it was David’s time to transition to another class, and Delia left to join a different class too, likely more advanced. Patricia and I were then introduced to Maria, a 31-year old teacher from southern Italy. She was full of laughter and jokes as she led us through vocabulary words. The general topic was “Details” and we learned how to describe information about people like their work, hobbies, musical preferences, favorite color, favorite beverage and food, sports, languages they know, marital status, and general personality traits. Soon Maria, too, was asking my vocation, and when I answered, “Sono scrittore,” she unfortunately asked, “How long have you been a writer?” Thinking back to the immigration officer in London who’d negotiated the answer with me I responded, “Four days.” She would have none of that, and before long I was describing my work as a Methodist pastor for 34 years. Soon I was also sharing in halting Italian about divorce, girlfriend, children, languages I’d learned, educational attainment, etc. Patricia also shared, as did Maria. We enjoyed much laughter as we learned about each other. Maria had ruled that English was forbidden in class. Spanish, however, would be acceptable, which was a great relief. Both Patricia and I spent much of the class speaking and hearing in Español. I’m not sure either of us can separate the two languages quite yet.

After class Patricia and I walked up to the main pedestrian area and sat for a quick lunch. She’s a communications student at university in Amsterdam with a boyfriend of 5 years. She reminded me that I’d told her I had a 2:00 meeting, so I jogged down the street at 2:01 to meet Kenneth Miner, a Camino de Santiago pilgrim from Oklahoma with whom I’d been chatting on Facebook and on this blog. Kenneth was inspired to walk from Assisi to Rome after reading last year’s blog entries and he heads off tomorrow from Assisi. He’s something of a medical miracle, having had leg bones on both sides replaced in surgery last year.

After lunch I headed home to blog a little, then took a quick nap before my 5:00 p.m. tour of the city with other students. David served as our guide and walked us through the Papal Fortress and many other sites in town, after which we gathered over drinks in a hip bar. As we sat and I listened to other students talk I couldn’t help but feel very old and very tired. My head was about to explode with so much input all at once. I decided to believe that if I can survive these four weeks I will come out knowing some Italian. 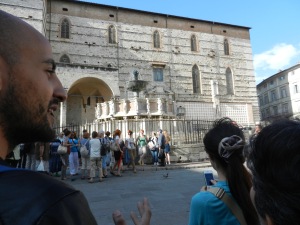 David shows our group the fountain at Piazza 4 Novembre in the heart of Perugia.

After the tour I headed back home, ready for dinner. I’m longing to speak only in English for awhile, but as I walked I had Italian phrases running through my head and I was starting to think about how I would tell Graciella that I may miss dinner tomorrow night due to a bike trip to Lake Trasimeno. Funny that the words I should say in Italian came instantly into my head. Maybe some will indeed be sticky enough to be there when I need them over the next months.

Dinner included an Italian monologue on the topic of dinosaurs by Graciella’s grandson, Alesandro. He’s a bundle of energy, which is much more than I am after a hard first day of Italian. Graciella, who’s hosted many students, asked in Italian if I was tired. I answered honestly. She slowly and knowingly nodded her head as she swallowed a bite of salad. “Il primo giorno è sempre il più difficile.”

Along with bread, water, a bottle of local white wine, and all of the plates and utensils I couldn’t help but notice a jar of Nutella® sitting alone in front of my plate. Graziella picked it up, showed it to me, and said, “Look what I bought at the store today.”

2 thoughts on “Look out — My head is about to explode”