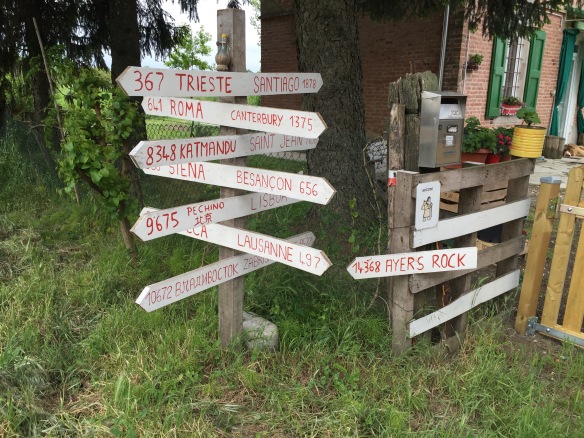 Hospitable display in a front yard along the path

Other than learning new Italian words, the day was spent in the countryside, playing hide and seek with the Italian A1 superhighway, an alternate mode of transport between Fiorenzuola and Fidenza, or for that matter between Milan and Rome. I twice crossed the freeway on sparkling new overpasses as our pilgrim route wandered among quiet country roads to find its goal. 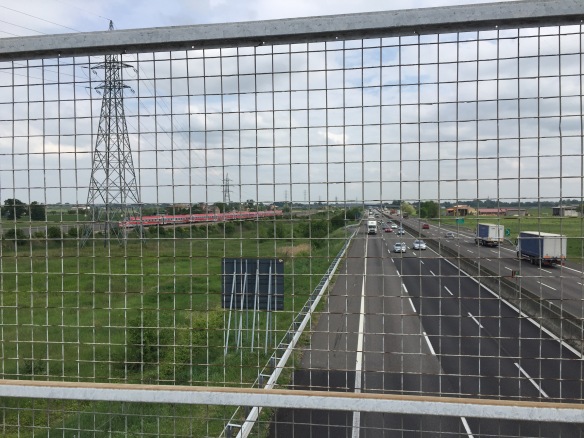 Beyond the mesh barrier is a different way to Rome.

I woke with a surprise this morning. I’d slept until 7:30, very late for a responsible pilgrim. After gathering up my things I headed first to a local cafe for breakfast and a “to-go” sandwich, then to a fruit store to top off my lunch sack. Then it was across the rail tracks and out of town, heading for my first goal of Chiarevalle Della Colomba and its 12th century abbey. 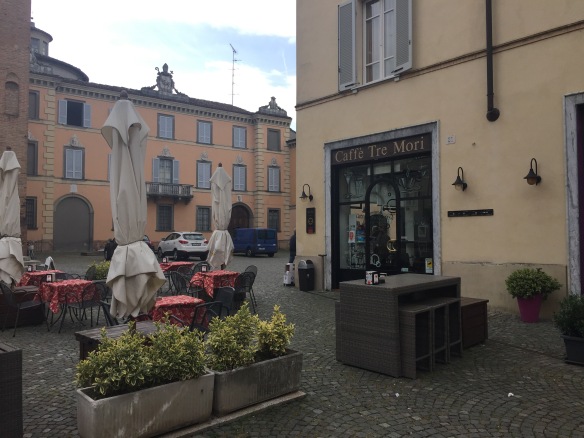 Breakfast site. it takes courage to name your cafe “Three Died”. And courage to eat there. 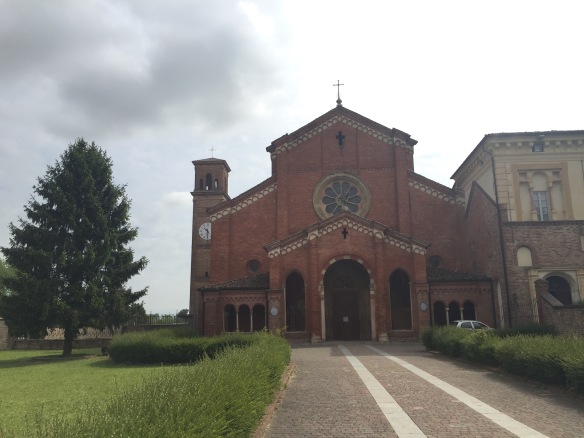 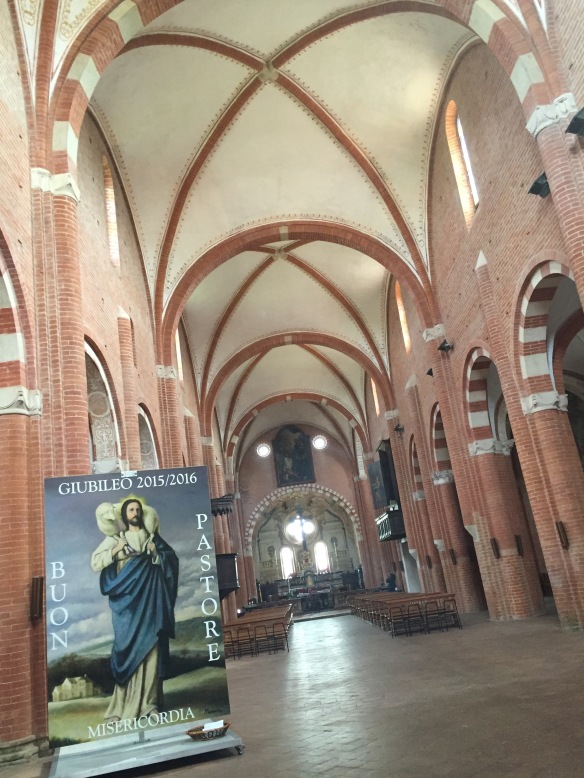 After the Abbey was the first crossing of the A1, followed by a series of farm roads, zigzagging through the countryside. 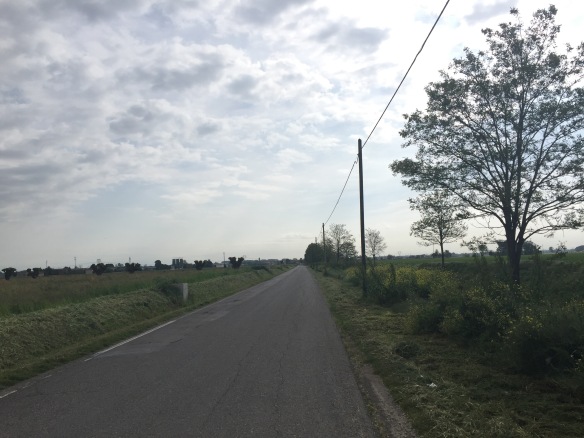 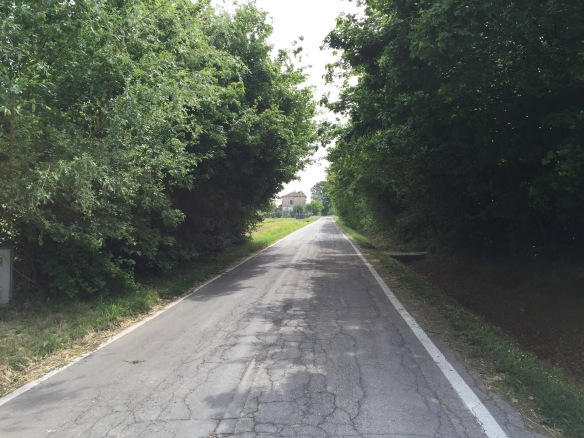 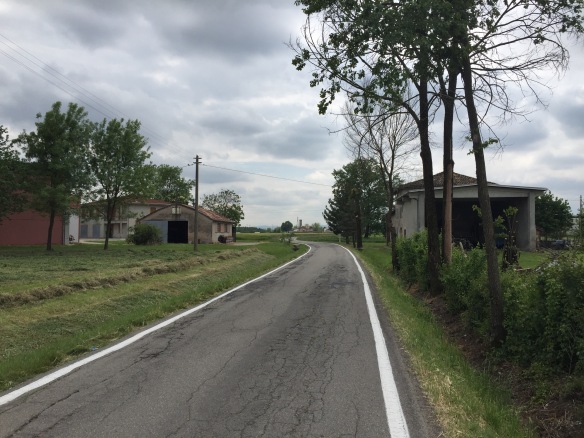 I stopped at a park in Castione Marchesi to eat my lunch, then continued on along more farm roads to another crossing of the A1. I saw no cows today, but I came to understand how omnipresent silage smells much the same as cow manure.

Thanks to its surprisingly-tall-for-in-a-small-town buildings, Fidenza soon became visible to the south. Somehow it look longer to get there than seemed necessary, but when I arrived I was rewarded with a visit to Fidenza’s Duomo San Donnino, built from brick nearly 800 years ago and a good example of Lonbardy Romanesque style (says the guidebook). 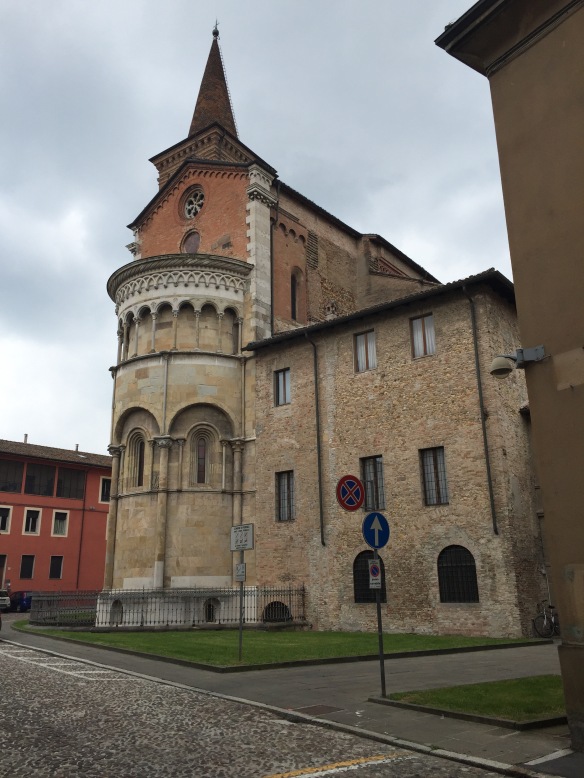 Since the front facade is covered in scaffolding, here’s a photo of the back of Fidenza’s Duomo. 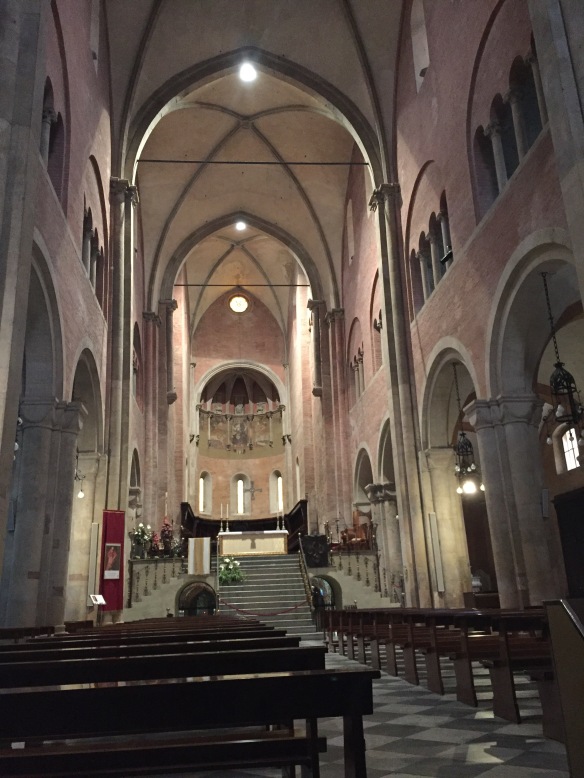 The Fidenza Duomo’s interior and its unusually high altar.

After that it was off to my room for the night for a shower and welcome rest.

Tomorrow the plains of Emilia-Romanga become a memory as the route heads for the hills. I’m ready for a change of scenery and am looking forward to some mountains. 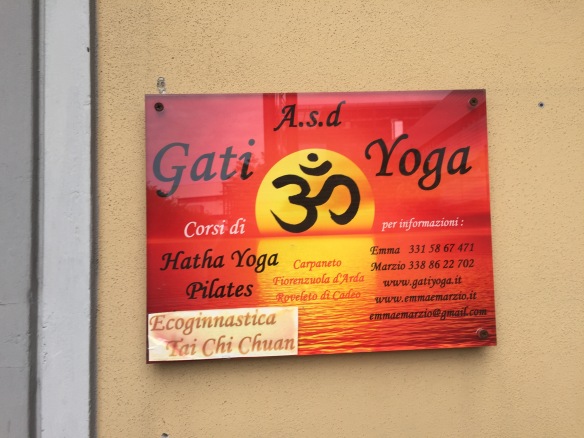 Yoga has discovered Italy! (A sugn on the outskirts of Piacenza).

*There’s a story inside that series of translations that goes like this: yesterday I developed a couple of non-serious blisters which I drained and bandaged right away. Today they were annoying and I couldn’t keep the bandages on so I tied one bandage — too tightly it turns out — with adhesive tape around my foot. This exacerbated a recent problem I’ve developed in which my foot decides not to allow me to stand or walk on it. Sadly, the pain became extreme about 8km (5 miles) from today’s goal. That meant three hours of hobbling rather than one and a half hours of walking. The good news is that after Ibuprofen and a good night’s sleep the pain completely goes away and I can walk again. The Italian words derive from a conversation at the very first Farmacia I could find in Fidenza.

4 thoughts on “Italian for blister is “vescica””