On pilgrimage in Italy, I’ve seen a fair amount of four-legged wildlife. Near Badia Prataglia I saw a family of boars, as I did also near Ponticelli. I’ve seen deer, too.

I’ve come to think of pilgrim pairs as four-legged animals. Perhaps it’s because I’m single and everyone else has a spouse or friend. Like Eiler and Halvard, two fun Norwegians I met last night and shared lunch with today. They walk closely together — like a four-legged beast — though their front and back legs are interchangeable depending on who leads.

Eiler, who slept in the bunk below me last night, gave me a tiny sticker with his name and email address. I had no great place to stick it, so I put it on my little tube of ChapStick. Now I tell Eiler that his name is always on my lips.

In addition to the Norwegian pair there is a French couple and also a couple of young Italian lads. I’m the sole loner, amongst people walking this stage today.

Anyway, enough about four-legged pilgrim couples and boars because the four legged wildlife I’m really excited about is….

A wolf. I’m pretty sure that today I saw a wolf.

In truth, it could have been a large fox or a feral dog, but it looked like a wolf to me, and I’m sticking to my story.

My wolf sighting came after the point where the track veers off pavement and heads into a stretch of back country. There’s a sort of plateau between Galleno and Ponte a Cappiano that is heavily wooded and rather remote, where the path is full of puddles in some places and in others is deeply rutted. In addition to the wolf sighting, I stumbled across two friends trying to extricate a Fiat from a deep mud hole.

Judge for yourself. Here’s a photo of the wolf:

In the pic above it’s dead ahead on the trail. It was limping as it walked toward me, dark brown and black in color. When it saw me it stopped. I took a photo and by the second picture it had gone. (nb: I spoke to a forestry expert this evening who happened to sit next to me at dinner. He said there ARE wolves in Tuscany. Grey ones. I saw a mixed breed wolf/dog. Still a cool deal!)

Compared to that, not much else happened today. Now that my ankle is close to normal, the distance went quickly. I arrived at the Convent of San Miniato about 2:30 I think and had a nice visit with the volunteer hosts before heading to my cell. That’s what it is, really. Small, simple, and right in the cloister at what Italians would call a convent and what we would call a friary.

Chapel is at 7pm. Dinner is at 8:00. Friday it’s fish in the convent refectory. Breakfast at a refreshing 6:30. What four-legged beasts await tomorrow?

Hallway inside the cloisters. 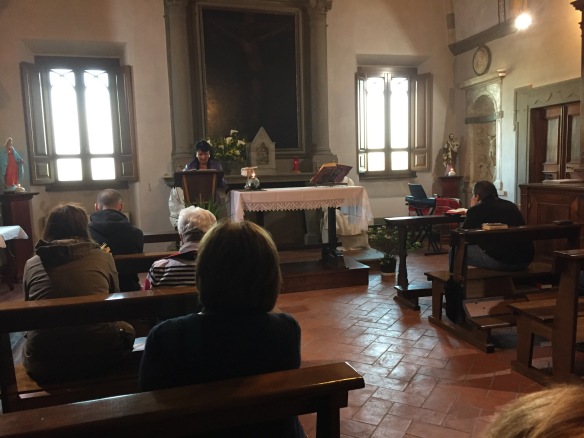 Vespers with the friars and commmunity.