Looking back to San Quirico d’Orcia this morning.

With my clothes and boots wet from yesterday’s rainstorm I decided to splurge on a bargain rate hotel and I’m glad I did. Last night I hung my boots from the shower curtain rail and left the bathroom’s heat lamp and fan on all night long. By morning my boots were dry, as were all my formerly wet clothes. This meant I’d have dry things for what was billed as a long and difficult walk.

Heading out of town at the same time were Roberto and Stefano, two young Italians from Lombardy who are on the same itinerary as me. We chatted on the road to Bagno di Vignano, a local hot spring once favored by the famous St. Catherine of Siena. 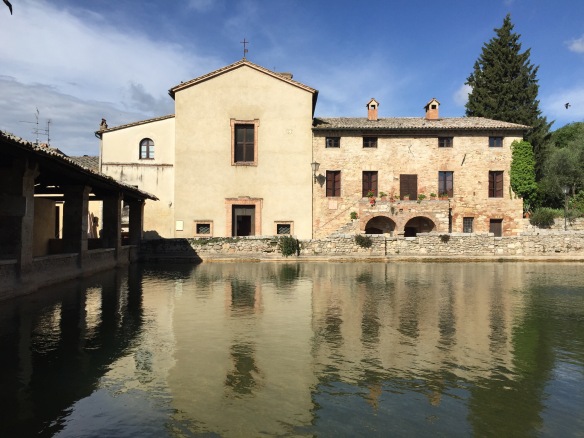 A town square made of a hot spring pool.

As we left the hot springs we looked off in the distance and realized we could see our goal for the day — the castle town of Radicofani — on a distant mountain. A beautiful sight at a daunting distance.

In fact, the castle of Radicofani was visible almost all day, a painful reminder of how slowly walking gets one toward a distant goal. 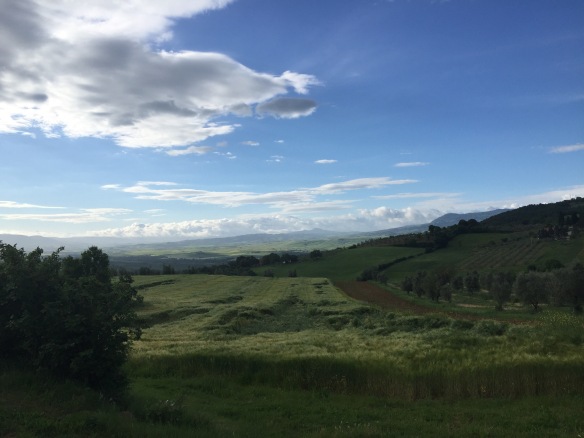 Look for a castle on the farthest mountain. That’s Radicofani

Not watching the guidebook carefully, Stefano, Roberto and I ended up taking the long way, which added another 5 km to the already long distance. Before long I said goodbye to the guys and pushed ahead to the day’s goal, first heading down the nearby mountains, then across the rolling hills dotted with sheep pastures.

Very, very slowly, as I crossed creeks and highways and walked alongside fields and farms, the castle began to grow larger. It loomed ahead of me like a hypnotist’s pendulum that had enchanted me and taken away my free will. 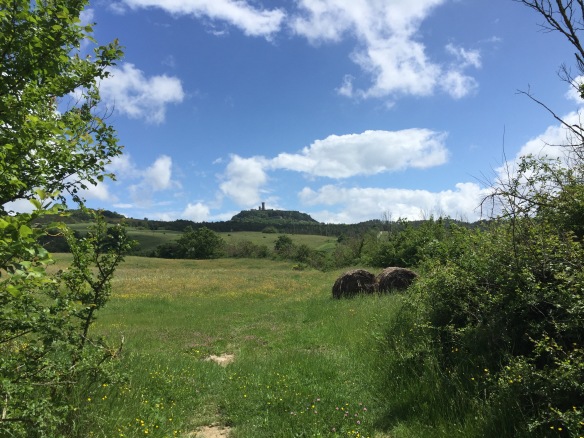 After many hours, the castle draws nearer.

According to the guidebook, the last nine kilometers (5 miles) are straight up. I would argue with that. I would describe the last 12 km as exhausting, a test of character and physical strength. Not only steep, but a 25 knot headwind to push on a pilgrim’s chest and blow off his hat. If there’d been a taxi driving by, I’d have waved it down. If there was a bus, I’d have stopped it. If there’s been a pickup truck, I’d have jumped in the back. If there’d been an ox cart I’d have offered to work for the farmer for seven years just for a ride up the torturous hill.

But, after pushing hard, I finally arrived at the top. I settled into the hostel, did my laundry, greeted Stefano and Roberto when they arrived, and then dodged raindrops to make my way above the village to the fortezza just so I could say I’d conquered the mountain.

The fortezza (fortress) from the charming town of Radicofani

Sadly, just as I arrived at the castle cafe, the heavens let loose in a torrent. I shall not be stopped by a torrent, I said to myself. So I waited out the torrent, only for the rain to be replaced by fog.

Walking up past the village toward the fortezza.

I climbed up the steps in the fog to the penultimate floor before the top and then stopped. I caught the scent of garlic on the wind from the village below. Supper calls, and rest. Today the mountain wins.

4 thoughts on “Just walk to that castle on the distant, windy mountain”