The town of St Rhemy

When I awoke this morning and looked out at the weather outside my window atop the Great St Bernard Pass I faced a tough choice. Should I walk in the rain and cold or stay another night in this frigid, socked-in outpost far from civilization? At coffee, Ursula, who had stayed across the lake at the famous St Bernard Hospice, told me she was staying put, even though the weather report for tomorrow includes snow at this elevation. That set my choice for me. One day cooped up in this beautiful but quiet place would be bad enough. Two would be unbearable.

Since it’s clear our schedules are unlikely to intersect again, Ursula and I shared a poignant farewell. I headed to the hotel’s breakfast room, where I stuffed myself on my typical pilgrim breakfast — pastries slathered in yogurt. I packed and headed out around 9:00 — a very late start — and headed down into the clouds with the goal of reaching Aosta, some 7,000 feet below.

Above the trees, with the clouds gently brushing the top of my head, I began to realize it wasn’t raining after all. Like yesterday’s trail, except steeply downhill, the terrain was rocky and rough, with heather and lichen the primary greenery. Most of the trails were also tiny streams, and only once did I have to carefully jump across a 5-6 foot creek.

As I neared the exit/entry to the car tunnel across the canyon the trees picked up again, and stayed with me the rest of the day. Sometime after Saint Remy an irrigation canal — the Ru Neuf — became a noisy companion as it loudly splashed a two foot channel of water down the hill.

The canal construction, with its adjacent service pathway, kept the downhill grade very gentle for many miles. Sometime around Gignon the canal turned aside and the remainder of the day was hide and seek with the tiny towns that make up the Aosta Valley.

After lunch in Etroubles, roughly the day’s halfway point, I noticed a serious-looking hiker ambling down the path. By Gignod I had caught up to him — Charles of New Brunswick, Canada — who is halfway along on his walk from Canterbury to Rome. We talked loudly as we made our way down and farther down between houses to Aosta. Finally. We checked in at Hotel al Caminetto, a bargain spot, and headed to our rooms. Since many of my clothes were still damp I headed to the laundromat to do the wash and then joined Tomaso and Charles for an intense dinner discussion. Just what caminos are meant for. The intensity was fueled by too much wine and many days’ lack of conversation. We came to realize that we three, from vastly different backgrounds, had a lot in common.

After walking nearly 40km in a relentless downhill grade my feet are sore. I have no blisters, but I am dealing with a wayward toenail that rubs against my shoe in an awkward way. I think it’s smart to take tomorrow off, to heal up, get refreshed, and let my body heal itself from the abuse. Tomaso and Charles leave without me, but they have their walk and I have mine. I’ll miss them, along with Ursula, my Via Francigena family.

Hiking Notes: going this distance was unnecessarily brutal, but by doing two stages I’m able to stay on schedule while also taking a rest day tomorrow. I recommend an overnight at Etroubles for those who want to break up the otherwise long walk. Signage was great, the constant downhill was punishing. I’m looking forward to exploring this charming, mid sized city tomorrow. 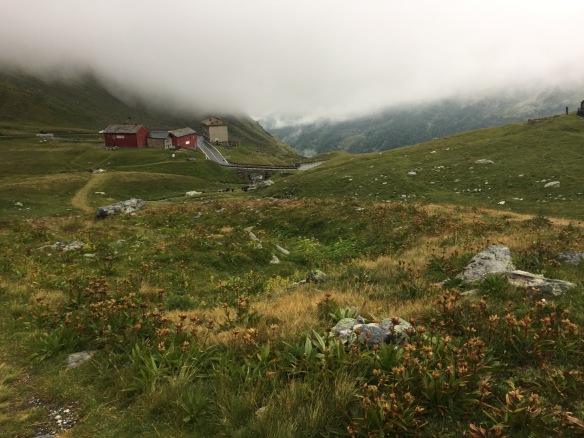 Can you fnd the cows? 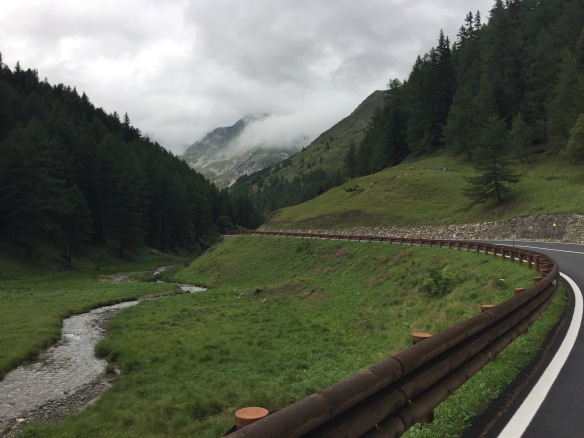 Below the tree line.

Canal on right. Great footpath on left. For many km.

Nobody knows the Etroubles I’ve seen. 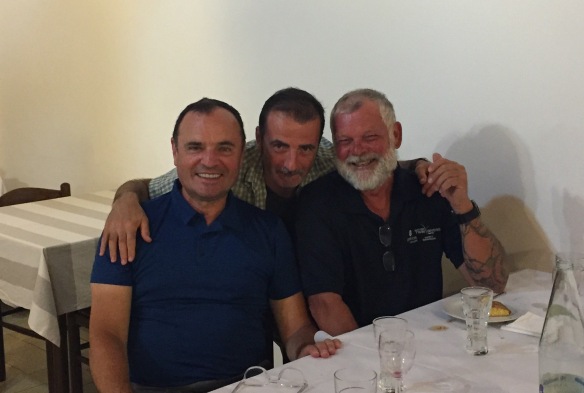 Love these guys. From left: me, Tomaso, Charles at the hotel’s dinner.