Day Eleven: Llanes to Ribadesella — So far the waymarking in Asturias is not impressive. Last night as I was hunting for dinner I saw one of the blue and yellow Asturian way markers, so this morning I went back to that point, assuming I would find the route. Nope. So I got out my Google Map app on my iPhone and followed its “beta” walking directions out of town. Apparently “beta” walking directions mean they are actually driving directions, because I was immediately on the main auto road out of town.

I walked along the shoulder until the town of Poo and, pun intended, directions got even crappier from here. I saw a scallop arrow on a tiny street, followed it, and once again ended up at an intersection with no marker for where to go. So again I resorted to the iPhone map, which emptied me out along with Poo itself onto the AS-263 highway, a busy two lane road with no shoulder and apparently no speed limit.

I learned that the most dangerous times for a pedestrian to share a narrow, shoulder-less road are: a) when the sun is at your back, b) when there are lots of slow trucks, and c) when it’s Friday and everyone is in a hurry to get out of town for the weekend so they are madly passing slower cars. Today, all three conditions applied, so I found myself simply hoping that God would get me out of Poo alive.

I suspect that EU-enforced austerity measures have led Spain to lay off their roadside maintenance crews. The result is that the tall, unmown grass at the road’s edge is annoying and dangerous. The grass and weed stalks are scratchy on the arms and legs, forcing the pedestrian farther out onto the road to avoid them.

After a harrowing transit on the roadside I found myself in Celorio and back on the camino. Here the track joined back up with the GR-E9 and hopped from gorgeous beach to more gorgeous beach. I took a second breakfast (my first being some leftover fruit and pastries) from the dining room of a pretty hotel (in the next village of Barru) with a spectacular view of a small, sunny and beautiful beach. I thought to myself, “I could stay here for a day ….. or a summer,” but I dragged myself onward from my sunny reverie.

Back on the now well-marked trail (courtesy of the GR system) I was passed by two colorful Italianos and then passed a middle-aged French couple. In a few moments I heard the sound of rapid talking and turned to see Amelia, Julien and Florian (from the Mad Men motel) approaching. Julien stayed behind at first to visit in his native tongue with the French couple and Amelia and Florian and I enjoyed our reunion and continued ahead.

The remainder of the day was spent in the delightful company of these three youngsters. Amelia, 28, is from California and has a degree in Government from Skidmore. She’s hoping to be a counselor of some sort and plans to begin a PsyD degree this fall. Julien, 28, is a physical therapist in Quebec and he had taken the option of a 20% pay cut that allows him 7 months’ vacation every few years. Florian, 20, is Dutch and presently in college. He worked recently for a circus in Amsterdam. Amelia serves as “mom” for “the boys” and ensures they all have enough to eat. She settles any disagreements and determines the schedule for the day. It’s a cozy, familial arrangement that benefits them all.

We walked together on green, shady paths with gentle inclines to the town of Nueva, where the bartender of a shaded cafe on the main street allowed mis amigos con su comida to join me at my table. While I devoured a tiny racion of chicken sandwich (kitchen closed at the early hour of 12:30) they unwrapped a meal of bread, cheese, chips and jam while Amelia apportioned each his allotment of ham.

Before leaving, Amelia excused herself to use the restroom, at which time the men teased her about needing plumbing to do her business. She responded, “oh yes, for you men the world is your toilet.”

True. Accepted pilgrim protocol when the need arises is for pilgrims, male or female, to find a private bush. We each carry our own role of toilet paper for just this moment. Obviously men have it a little easier most of the time out in the bush, but Amelia’s sharp reply to the men brought a smile to my face in a day that had already contained some scatological thoughts.

With abundant conversation amongst us four the kilometers quickly ticked away. Amelia and I worked to impress the other two with our fluency in American culture, at one point singing through the songs of Wizard of Oz, Dorothy’s — I mean Amelia’s — favorite musical.

When we arrived at Ribadesella, since the three were going another 5 km, we exchanged emails, at Amelia’s kind suggestion, took pictures, and said our goodbyes. I hope I’ll see the three again soon, before they head off this track to the Camino Primitivo.

An added bonus to the day: as I was searching for a hotel I stumbled into Begona, Anna, Pilar, Annabelle and Nuria. This is their last day on the camino and I’m sad to see them go. At their suggestion I took a room at their hotel and perhaps tonight I’ll see them again and say my goodbyes to them, too.

Post script: After shower and a nap who should I see but Amelia and the boys, who choose to stay here in Ribadesella after all. Now there’s more chance of conversation tomorrow with these great young folks. 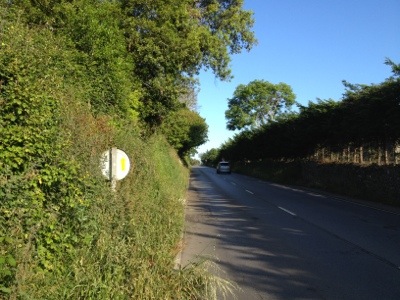 Narrow road out of Poo. Look out for your life! 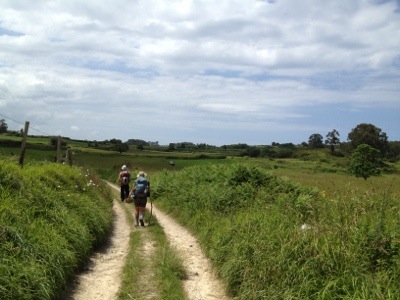 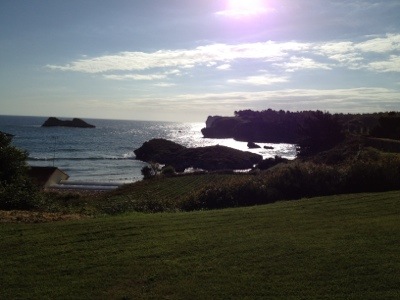 Morning by the sea.