Day Eleven: Ribadesella to Sebrayo — Last night ended up being surprisingly social as I visited over a nightcap with the five Spanish women. I think we all had fun, but I’m not sure since I understood only every other word. They seemed to really like it when I bought us all a round of drinks, so I might have hit on an international language understood by all.

After a nice sleep in my lovely but tiny room I awakened at 7:15 and was on the trail by 7:45. I stopped for coffee and a croissant at a cafe near the Plaza Mayor then headed across the bridge to the west side of town, which features a long promenade along the beach. This was a great start to the day, though I had to snuggle inside my rain jacket to stay warm in the wind.

As it turned out, from Ribadesella to La Isla is one great stretch of countryside. The path overlooked beach after beach, many with surfers taking advantage of the high waves. At the town of Vega I stopped with Linda and her boyfriend from France (both of whom I’d met at on our first boat crossing and also at Guemes). I showed her my “Things Scatalogical” blog post and she erupted in shock and then laughter, which of course made me worry that I’d crossed a line into bad taste. But maybe that topic is part of a humorous international language that everyone understands — or maybe bad taste is the same in many cultures?

Anyway, Vega and its surrounding countryside made a big impression on me. Though it was starting to rain, the views of beach after beach — all seen from the vantage point of green pastures with sheep and cows and horses — was just amazing. I could live here in this paradise. But I think I’ve said that almost every day. Perhaps in Vega what got me was the California surfer vibe, like what California must’ve been like 75 years ago. Few houses, great waves, quiet beaches, and a beachside cafe for a cheap beer between waves.

The coastal path continued through the town of La Isla, where tourism has brought crowds and the inevitable subdivisions of vacation homes. As I left La Isla for the town of Colunga, after crossing the car bridge and walking again along the highway, I noticed a sign advertising the region: “Asturias: Parais Natural” — Asturias: Natural Paradise.

With apologies to the ghost of John Milton, if there’s a paradise I am going to get lost in it. No sooner had I seen the sign than I followed the way markings to a dead end. The yellow arrow directed me to an empty subdivision (property boundaries and sidewalks but no homes) and I tried one path after another to pick up the trail. On my last attempt I found a location that sounded a lot like the description in the guidebook. So I took it and stuck with it until it dribbled into nothing. I got out my iPhone and used the GPS feature and I saw where I should go — to a road across three pastures, each with its own electrified fence.

After deciding not to test the fences’ voltage I took another stab at finding the right road and this time ended up at the freeway, a great way to get to Colunga if you could pole vault the highway fence and have your mom in a car waiting for you. No such luck on either count, so I checked the map program, saw what looked like a road in the satellite photo, and took it. Almost two hours after losing my way I found my first camino marker. I was back in business.

I knew, though, that this was now going to be a very long day. The distance was to be 32 km (20 miles), but my 2 hour detour added distance and time to my day. When I arrived at Colunga at 3:00 with three hours left of walking to Sebrayo I had to decide whether to reduce my planned distance for the day or press on and get in late.

There was just something about Colunga that didn’t appeal to me, though it does have a pretty church. But the idea of missing my goal didn’t seen right. So after a cervesa, a chocolate croissant and a mystery meat sandwich (he said in was ground chicken….) I headed on to Sebrayo.

Past Colunga the camino follows grass and gravel trails and small, paved roads through tiny hamlets. In one tiny town its little church building was consecrated in the year 921. A nice neighbor lady let me in to take photos. Because of the tree cover and recent rains the paths were often quite muddy.

At 6:15 I pulled into the tiny village of Sebrayo, whose only business is its pilgrim albergue, and who should be in the entry but Amelia of Berkeley! I enjoyed a happy reunion with her, Flarent and Julien, along with Nacho of Barcelona (our interpreter at Guemes), John of Calgary, two new Americans (Seth and Jeff) and the nice French couple from Brittany.

Since Sebrayo has no businesses, pilgrims have a choice of waiting for the grocery truck at 19:00 or walking 10 minutes through mud to a restaurant in the town on the next ridge. The truck held no enselada mixta or huevos fritos, much less vino tinto, so John and I walked the muddy ten minutes to the restaurant.

Making the day’s goal was nice, but even nicer was having a chance to see the people of our “wave” of pilgrims who are now leaving the Camino del Norte for the alternate route to Santiago, the Camino Primitivo. Tonight is a goodbye to Amelia, Julien, Florian, John, the French couple, etc. It’s possible I’ll see them in Santiago, but no guarantees. So, some sad goodbyes at the close of a long day of being lost in paradise. 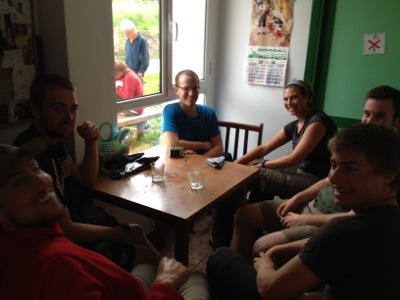 Clockwise from bottom left: John of Calgary, Jeff of Boston, Julien of Quebec, Amelia of SF, Seth of Wisconsin, Florian of Amsterdam 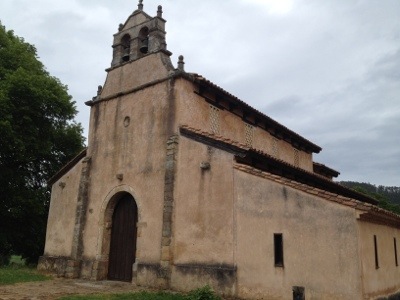 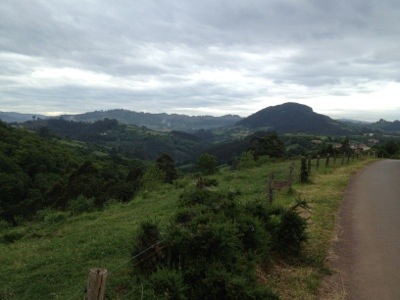 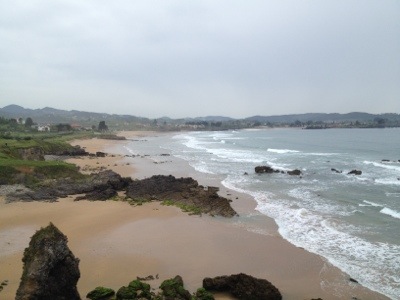 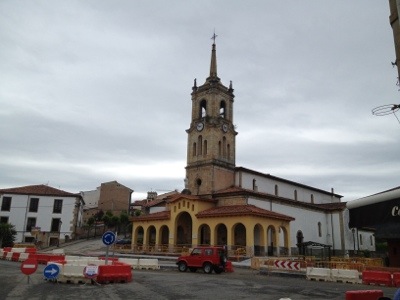 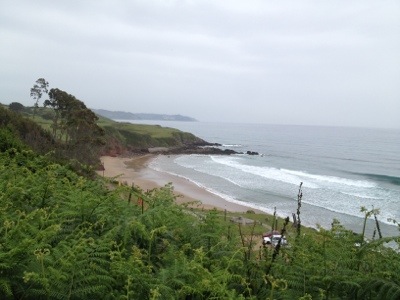 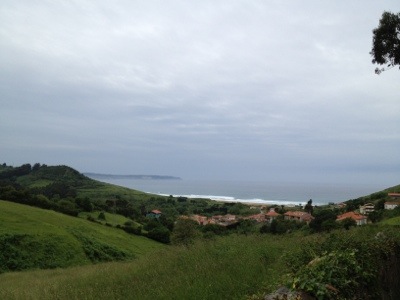 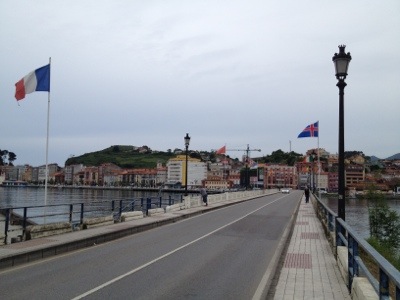 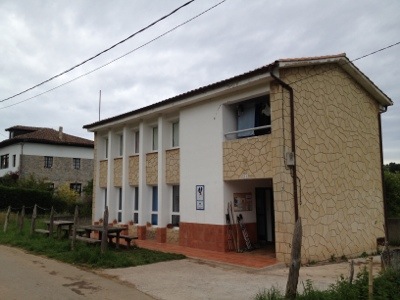 3 thoughts on “In Paradise, Lost”