Day Twelve: Sebrayo to Deba (Gijon) — Today was the most grueling stage of any on this year’s camino and to make it even worse I hadn’t brought enough water. By midday I was parched and exhausted. By the end of the day I was begging for mercy. So today I will give myself the luxury of complaining about everything.

I awoke this morning at 5:30 to the sounds of multiple pilgrim alarms going off amid the 14 bunks of the Sebrayo albergue. One, probably belonging to a pilgrim who was upstairs eating breakfast, went off every 10 minutes, begging its absent owner to wake up. Finally at 6:30 I got out of bed, quietly packed my things, and headed out for the day’s walk.

I knew I was lacking two things as I left. 1) I hadn’t had my credential stamped by the hospitalera — she had apparently appeared 2-3 times in the evening, but because I was late getting in yesterday I’d missed her each time. 2) I hadn’t bought water. Many pilgrims just use albergue tap water to drink, but I don’t really trust it in these rural, farm-animal rich locales. So unless I’ve purchased a 1.5 liter bottle the night before (which I hadn’t) I rely on what’s leftover in my CamelBak (which wasn’t much).

Nevertheless, I headed out alone at 7:00 to walk the 30 km (18 miles) to Deva, just shy of the major Asturian city of Gijon.

Within 20 minutes I was surprised and delighted to hear John of Calgary’s voice asking if he could join me. Of course! I’d said my goodbyes to him last night, knowing he was headed to the Camino Primitivo today. So it was an unexpected treat to have him for a couple of hours before the Primitivo splits off to the south.

The first thing we did was get lost. John, 25, is an automation programmer, mountaineer, snowboarder and motorcyclist. That gave us plenty to talk about. And talk we did, right past the turn off. We kept on walking — on a steep uphill — realizing we hadn’t seen a way marker in some time, but deep in conversation. When we arrived at an intersection with no way markers at all I asked a local where we were. His response, “You’re lost!” He gave us directions back to the camino but instead we consulted my iPhone map and took the car road to Villaviciosa. Our detour had turned a 75 minute walk into 2.5 hours.

We arrived thirsty for coffee and not sure how to find our way back to the trail in this town of 10,000 or so. We stopped at a hotel, planning to ask for directions, and convinced the hotel dining room’s waitress to serve us breakfast. After coffee she kindly loaded me down with cookies and muffins for the road (John is gluten intolerant) and sent us off with a stamp for my credential and directions to the camino. A few minutes later we were on a gravel, pedestrian walkway heading out of town.

Unfortunately, in about 30 minutes (near Grases) we reached the junction with the Primitivo and it was time to say a final goodbye to John. He has been a great walking companion on and off for nearly my entire camino and I will miss him. A kindly Spanish pilgrim (whom I later came to know as Jose of Madrid) took a photo of us standing at the junction marker, pointing in our individual directions.

After Grases the camino wandered along a local paved road to the town of Nievares, where it took a very, very steep climb of 400 meters in just 5 km (1300 feet in about 3 miles) to Alto de Cruz. Unfortunately the sun was out, which meant I was sweating like an I-don’t-know-what, with only a few ounces of water in my pack. Shoulda bought water in Villaviciosa. The climb lasted forever and I saved my last swallow for the summit.

Immediately after reaching the top the wind changed to cold and the downhill trudge began. Many pilgrims feel the downhills are harder, more punishing to the feet, than the uphills. This one was on pavement so it didn’t seem too bad to me, but I was still very thirsty.

At the bottom of the hill I came to a large restaurant, Casa Pepito, and I celebrated my successful climb with a big salad and a plate of fried eggs and French fries. I was stuffed when I left Pepito’s but I figured I would just take it easy for a few km to let the big lunch settle, which would’ve been a good plan except that another huge hill awaited.

This one wasn’t polite enough to be on pavement. This new, insult of a hill was on muddy/rocky/slippery earth. My heavy, fatty lunch turned into a brick in my stomach as I walked each slow step upward. This time I had water, but my stomach was in no mood to receive it.

I finally reached the second summit and followed the road, then path, downward and downward toward the day’s goal of Deba. The last kilometers are always the longest, and these were no different. They were nicely punctuated, though, by a kind man who was barbecuing his dinner and who offered me some of his chilled, local cider. Asturians are proud of their cider and they pour it, this man included, out of the bottle from a height of about 4 feet above its receiving glass. It makes for a fun show and the cider does a good, low alcohol, job of quenching thirst. I briefly considered whether my stomach was ready for it and then immediately bottoms-upped the glass and thanked the kind man.

At about 4:00 I arrived at the Deva Albergue, which is situated in an enormous campground full of children playing soccer, swimming, or playing basketball. I took a luxurious camp shower and gathered my dirty clothes (i.e., all of them) and headed to the coin-op laundry. Spain and Italy were playing their Europe Cup game as Seth of Wisconsin and I chatted. Mone soon joined us, along with a tall multilingual Austrian woman named Karina. We pilgrims are clumped into small wooden cabins spread out over a hilly lawn, each with about six beds.

After a huge chicken dinner — I ate a lot today — I complained about some people making too much noise outside the cabin and went to bed.

OK, it was a tough day and I needed to complain a little. In reality I’m enjoying myself and meeting great people. Tomorrow I’m planning two rest days in Gijon as I wait for Martin. I know by the end of my long weekend I’ll be ready to face more walking. And hopefully I can manage them with less complaining.

Goodbye to John at the crossroads.

Big pool at the Deba albergue/campground 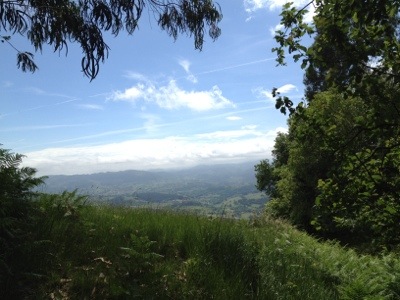 Note the distant valley floor from whence I walked.

Casa Pepito’s for a welcomed lunch, followed by yet another climb. 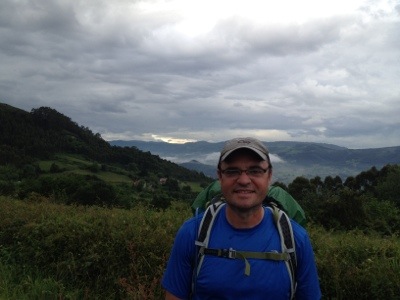