Day Seventeen: Cordillero to Cadavedo — After dinner last night we agreed that Martin would take the train ahead to Cadavedo or Luarca due to his knee problem. I got up and gathered my things at 7:00 while Martin snoozed in the bed next to me. Along with being a skosch jealous that he was able to sleep in I was also concerned about his knee and sad that today’s long stage would likely be done alone.

I had a quick cup of coffee and some toast and jam in the garage-like breakfast room of the hotel and set out on my own to finish yesterday’s stage. The French guidebook sends pilgrims on a 39 km journey from Aviles to Soto de Luina. We had cut the stage short by going only 28.2 km to Cordillero. So my plan for the day was to go to Soto de Luina then continue on to the guidebook’s next stage: another 23.6 km from Soto de Luina to Cadavedo. This would mean a longish total of about 35 km (22 miles), but I felt good and I knew this would allow me to keep to the itinerary.

I walked downhill out of Cordillero, skipping the core of this workaday slash touristic fishing village where Martin and I had taxied last night to enjoy a seafood paella. I came to the busy N-632 highway and crossed it carefully to avoid speeding cars during the morning rush. Here I misread the guidebook, missing the turnoff and instead faced into traffic for a longer-than-required sojourn on the road. After a few km the “old” N-632 appeared next to the “new” one. I saw a yellow arrow and switched to the old one. This “old national,” as it’s called, snaked its way next to the camino all day.

I caught my first sight of the ocean at Marino Restaurant, took a photo and applied a Compeed patch to a new old blister. Just as I was finishing up, two pilgrims joined me. Michael, 30, is from Bavaria and is finishing university and heading into computer game programming as a career. Stefan, 22, is from Ottawa and is also a university student, just having finished a semester of study abroad in Madrid. The two would be great walking companions through what promised to be a long day.

After introductions and a few km together we were lost. The camino markers took us to a spot under the new A-8 freeway bridge then left us at a construction site. We wandered around for 10-15 minutes, noticing a road below us but not sure how to get there. Michael bushwhacked our way through the undergrowth and voila, there we were at a 12 foot (4 meter), nearly vertical embankment. Before I could say, “uh-oh!” Michael had gracefully slid down the bank. Next was me. I threw my pack down to Michael then slid on my bottom to a landing made somewhat softer by Michael catching me before I nearly made a face plant in the asphalt. Stefan was next and he also gracefully slid on his rear to the asphalt. We emptied our shoes of branches and dirt, thanked our various deities that none of us was hurt, and consulted the iPhone GPS to see just where we were. As it turned out, within 500 meters we found ourselves at a camino detour sign and back in business.

So here’s how the day, in general, shaped up. Imagine that the “old national” highway is a long snake winding itself in loops for today’s 35 km. It finds its elevation then traverses hill after hill at that level, slithering out toward the coast until it finds a valley, then snaking its way inland until a small bridge can allow it to cross the inevitable creek. The road is beautifully maintained and blessedly free of cars since the “new” N-632 uses expensive tunnels and high bridges to cover the distances straighter and faster.

Then, imagine that a pathway connects each loop of the serpentine road by leading walkers down a few hundred feet to the valley floor then up a few hundred feet to the road again. This path is the Camino del Norte. You walk: a) along the road to b) a path down to the creek, followed by c) a path up from the creek, then to d) another stretch on the road, usually e) with a village. This pattern was repeated under sunny skies through the villages of Soto de Luina (coffee stop), Albuerne, Novellana (lunch stop), Castaneras, Santa Marina, Ballotas (beer stop), Tablizo, El Ribon, El Friera, and finally Cadavedo itself.

Thank heavens, many of the descents and ascents were on good, gravel pathways. But sometimes the paths were muddy and sometimes, particularly through meadows, the paths were clogged with thorn bushes and stinging nettles. Fortunately, Michael and Stefan used their walking sticks to slash away at the worst of the thorns or gently hold them back for me so I could pass.

I warned the two guys that at the first sight of a swimmable beach I wanted to throw off my pack and most of my clothes and jump in the water, so we kept looking for and hoping for a beach to appear. After Ballotas we were rewarded, or so it seemed.

At the bottom of our umpteenth descent the path had taken us to within 100 meters of a deserted beach. We walked down to the water, noting the powerful wave action, and decided it was best only to get in to about our knees. The cold surf was refreshing, but the rocks were painful on our bare feet, and as Michael stood in the water the powerful waves smacked a rock against his ankle bone, causing it to bleed and swelling up his ankle bone like he had an egg under the skin.

We were now suddenly concerned that our watery revery might have led to a camino-ending accident for Michael. I gave him alcohol and a bandage for the wound and Stefan lent him his sandals so that he could keep walking without having to wear his boots. We carefully walked our way to the final villages before Cadavedo, then said our goodbyes at the entrance to town.

Michael said he felt well and I shouldn’t worry as we split up for the night — they to stay in the albergue and I to try to find a hotel where I could convince the staff to do my laundry for me.

I found a room a few hundred meters later with a staff willing to do laundry chores and was delighted to see Julian of Honolulu there too, enjoying a class of wine. We shared dinner later and agreed to meet in the morning before walking together to Luarca. There I’ll rejoin a recuperating Martin, who I hope will be well enough to walk with me the rest of the way, and throughout the day I’ll be thinking of Michael, hoping his ankle is ok. 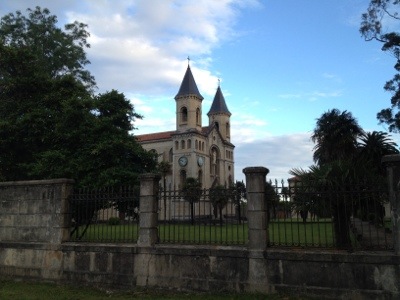 Morning light at El Pito church across from our pension 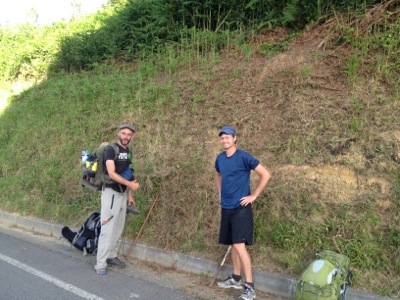 All smiles after sliding down the embankment to the roadway. 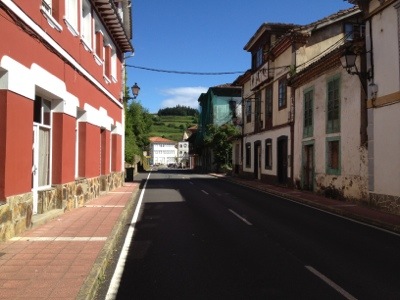 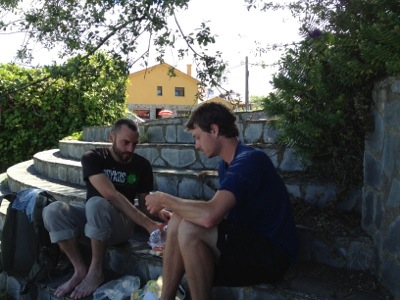 Lunch at Novellana with Michael (left) and Stefan. 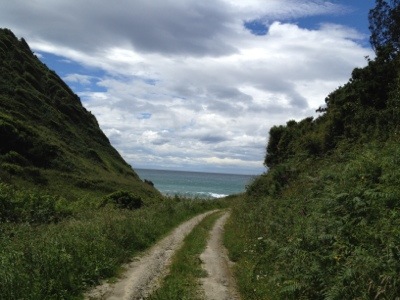 First view of our personal beach. 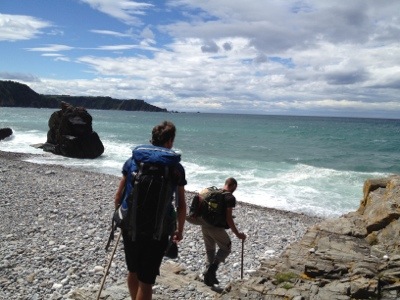 Steep climb down to the water.

Back on the trail into Cadavedo.

5 thoughts on “At Least No One Got Hurt (Too Badly)”