Day Eighteen: Cadavedo to Luarca — The morning started with a pleasant coffee and conversation with Julian of Honolulu who was staying at the same hotel. At one point in our talk he mentioned that he would stay at Cadavedo in order to wait out the rain.

“Yes, it rained torrents beginning at about 2 am this morning and it’s still raining. Didn’t you notice?”

I jumped up from my coffee to look out the hotel front window.

“My room looks out to the pasture and it just looked a little foggy,” I said. And then I saw what he meant. We were in the midst of a deluge, a gully washer as we call them back home.

I told Julian I was still planning to walk the 18 km to Luarca today, but I admit that as I returned to my room to pack my things I felt a little envious of his decision to remain in the dry comfort of the hotel.

Since I’d decided to walk anyway it was now time to make a rain plan. First, I needed to choose what to wear. I settled on long pants, long sleeved technical T-shirt, wide-brimmed hat to keep the rain from running down my neck, GoreTex jacket. My pack would have its rain cover on to keep it dry. I wanted to keep the insides of my boots dry, so I decided to try wearing my red recovery shoes (aka, ruby red slippers) and sock liners on my feet. My boots could then stay dry in my pack, but be available if needed. I also would put my iPhone into the waterproof plastic envelope I’d brought just for this purpose so that it could stay handy in an outside jacket pocket for photos and GPS consultation.

Second, I would need to decide which way to walk. Yesterday’s ups and downs through muck and rivulets sounded like trouble waiting to happen. I determined instead that I would take the chicken way out and walk along the road. It would be a dreary, boring four hour walk, but at least I wouldn’t be slipping and sliding through mud and thorns.

With those issues settled I set out from the hotel into the driving rain. The outside of my jacket was instantly soaked, but my arms and core were warm and dry. My pants were quickly wet, too, but I was very pleased that they still kept my legs warm and my ankles quite dry. I realized I would be able to change to my boots when needed and not worry about water running down my bare legs and filling my boots, as it had on last year’s camino when I was caught in a rainstorm wearing shorts.

I headed out of Cadavedo toward Villademoros, noting the road sign for cars that measured the remaining distance to Luarca at 15 km (9.5 miles) — a short distance, but a long walk.

Queruas was a rainy blur as I passed it. Before Canero I switched from the N632 to the N634 highway as directed and immediately noted that it was narrower and had many more tight curves.

At a bar/cafe in Canero I was pleased to see Michael and Stefan from yesterday. Michael’s ankle is fine and we talked briefly before they headed out. I kept my wet gear on and stood dripping at the coffee counter as I had my second cafe con leche of the morning.

I headed out, about 100 meters behind my two friends, and noticed a police car slowing down to talk with them. Soon the Guardia Civil officer drove by me and instructed me, like he had with my friends, to walk on the left side of the road for safety.

With all due respect to the Spanish national policeman, we pilgrims are rather sophisticated when it comes to playing chicken with cars. On a curvy, narrow road like the N634 the most dangerous place to be in a tight turn is on the left side. Speeding oncoming drivers are hugging the outside of their lane (our walking strip) in order to avoid oncoming cars. A pedestrian in their lane is in a precarious spot if he/she is in the oncoming lane when two cars are passing in the curve.

An experienced pilgrim approaches a tight turn in the outside lane where he/she can see what’s coming, then at the middle of the curve, if there are no cars, the pilgrim crosses onto the left side — after the curve. To be honest it’s all very dicey however it’s done. Almost enough to make a pilgrim take the pilgrim pathway.

As the rainy walk wore on I noticed that most drivers carefully gave a wide berth to me as a pedestrian. They usually put on their turn signal and moved slightly into the other lane so I wouldn’t have to stand in the weeds as they passed. In fact, the only truly scary driver was the one who came up from behind me and startled me with a loud honk and cheerful wave.

As the kilometers dripped away I could tell by the increasing density of homes that I was getting closer to the comforts of Luarca. At the outskirts of town the rain started to diminish and I moved off the road to the now-paved camino path. At a church bench I changed to the heavenly comfort of dry socks and boots, then was rewarded for my perseverance after a couple of km with a brilliant view from above the Luarca harbor.

I picked my way down the slippery, wet streets, texted Martin, and met him for chocolate churros and then lunch in the beautiful harbor. He’s feeling somewhat better, but will probably need another day at least of rest. His smiling face was a welcome sight to behold.

Martin had chosen a delightful room in a handy pension and after lunch I snuggled into bed for a warm and dry nap with promises of pizza tonight for dinner. 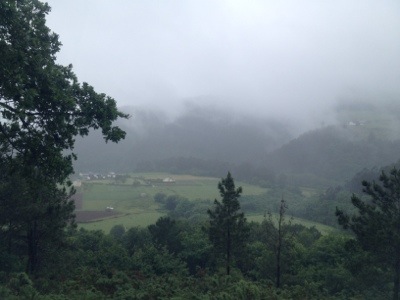 Stefan and Michael in rain gear at Canero.

Woulda jumped in on any other day. Cueva Beach.