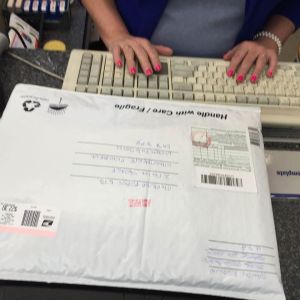 The package containing my manuscript gets mailed to Cicerone Press

When I returned from Italy in September my top priority was reacquainting myself with the amazing Theresa Elliott, but after that my top priorities were beginning my run for Seattle City Council and finishing work on my guidebook, The Way of St. Francis: From Florence to Assisi to Rome. The reunion with Theresa was fabulous. The start of my campaign was smooth (as evidenced by this, this and this). And work on the book was….slow.

I returned from Italy with the basic text of the book’s 29 chapters complete. In September and October I contemplated my approach to the book’s Introduction, and then in November I returned to writing and editing.

It soon became clear that my biggest challenge would be the 40,000 word limit. In fact, by mid-December I was already at 57,000 words. I’d already had conversations about expanding the word limit with Cicerone Press, and they were none too keen on the idea. Long experience taught them that, the longer the book, the less likely people would want to carry it with them in their packs.

So, much of December was a process of culling the book down to its word boundary. A key issue became an extra chapter I’d written that covered the Seven Pilgrim Churches of Rome. The walk had been an eyeopener for me, and I knew people would enjoy a walking guide to these important, historic churches. The last thing I wanted to do was cut this 2500 word chapter.

By the end of the process I’d culled out about 8,000 words and then negotiated a new limit of 50,000 words with Cicerone. Hooray! After some final edits I sent the manuscript in. Here how it worked out by the numbers:

The next step is a thorough edit by a Cicerone editor, followed by editing of the photos and maps. This process takes about six months, with printing encompassing another two-three months. In September the finished book will appear, just in time for people to start planning their 2016 walks.

One of the funnest tasks? Choosing a cover photo. Here’s what Theresa and I chose — actually a photo by Jacqueline Zeindlinger from our 2013 Via di Francesco. If Cicerone approves, this will be the cover pic folks see each time they pick up the book. Thanks to everyone who’s helped make this book a reality.

Jacqueline’s photo of me, Sebastian and Andreas walking in fields near Vallericco

12 thoughts on ““The Way of St. Francis” is now in production phase”