By the time I had finished reading Internet reviews of this mountainous stage I was admittedly a little keyed up. “You’ll be on a narrow path on the face of a rock cliff with nothing but a chain to hold onto.” Hmmmm. That doesn’t sound like fun. “The most difficult stage on all 1,700 km of the Via Francigena.” Also not that cool sounding. “Disregard the guidebook. I’ve seen grown men reduced to tears on this stretch.” Now that one had me really worried. I’m a grown man, and I’ve been known to cry (mostly during movies), so before setting out today I decided to take some precautions.

Precaution #1: Tell people where you are. I learned this years ago in Outdoor Education, so this morning I sent the details, including destination, route and anticipated arrival time to Theresa, who after me was the most worried person about the day’s walk.

Precaution #2: Don’t carry too much weight. As we all know, chain-based precipice dangling is much less risky with a light pack. Plus you’re more agile without a lot of dead weight on your back. So I’d planned to keep my hotel room for another night, leave unnecessary gear there, and return to it by train. If I survived.

Precaution #3: Don’t go alone. Well, the Universe was against me on this one.

And with those precautions I set out. Grimly determined to overcome whatever scary or dangerous obstacles awaited me.

The first hour or so was an urban walk to cute little Martigny Bourg, a sort of extremity of Martigny proper. I had coffee there and something important happened which I’ll describe later.

Next it was on to Martigny-Croixe which seems to be mostly just a train station. However it is the Last Chance station if you want to skip the scary dangerous part. I skipped the station instead and headed up into the unknown.

The next 5 km, to Bouvernier — the scary part — were steep, narrow, and not as intimidating as I’d feared. In this gorge — with the mountains so close together there is only room in the valley for the river, the railroad, and the highway — the path is forced up the hillside. But it’s not a cliff. And I saw no sign of chains as handholds. What I did see instead was some brilliant walking with longer than expected duration due to the constant need to snap photos.

Over the last couple of years of leading tour groups in Italy I’ve come to recognize that different experiences give people different perspectives on the difficulties of trail walking. Someone from Florida who’s never walked up a mountain has a different anxiety level than someone who lives, say, in Seattle where everything is on a mountain. And it’s perfectly ok for some people to be a little scared — even if there’s no real danger. Theresa has helped me recognize, too, that my threshold for exertion and danger may be a little higher than others’ and that I should be more understanding of the varieties of abilities and experiences.

As I chatted online with a few experienced pilgrims I came to understand that the path has lately been improved somewhat and that the clear and dry condition today definitely worked in my favor.

After the steep/narrow section there was a suspension footbridge that I did find to be a little wobbly/scary. The rest of the day was some boulder climbing, path walking, and road walking gradually up, uphill to Sembrancher (where something also important happened that I’ll tell you about in a moment) then La Douay, La Garde and finally Orsieres. A beautiful day of walking somewhere between (hardly) scary and (nowhere near) dangerous.

Oh, the important thing: I met another pilgrim. I saw her first at Martigny-Bourg as I took my coffee, then again from a distance on the trail near the wobbly footbridge. Finally, while having lunch at Sembrancher she strolled in and said “Bonjour.” We talked for an intense five minutes in French before I headed out. Her name is Ursula. She seems to keep her stages short, so I’m not sure how often I’ll see her, if at all. But it’s awesome that Precaution #3 above might be handled for at least a little bit.

Hiking notes: the route is very well marked and the “scary” stretches are sections of path about a foot wide with a 20m drop-off down a steep but tree-lined embankment on one side. There are also some slippery downhills, so good tread on your shoes will be very helpful. The official route after Sembrancher is quite lovely. I took the road on the very last stretch into Orsieres which worked out just fine. 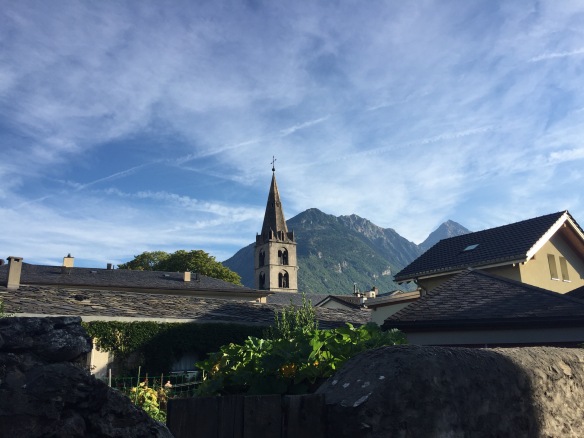 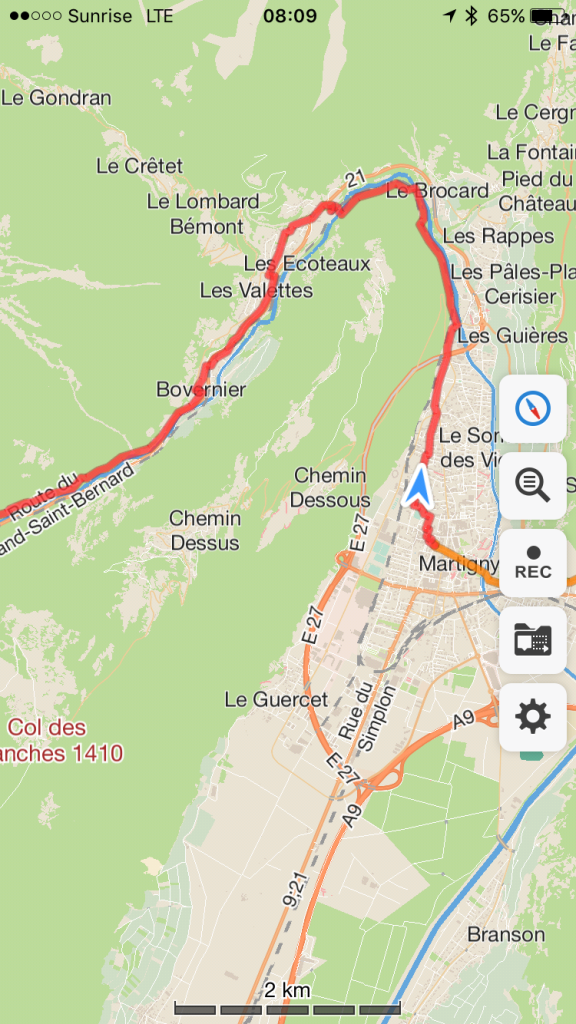 Map of the troublesome gorge.

Sample shot of the scary path. 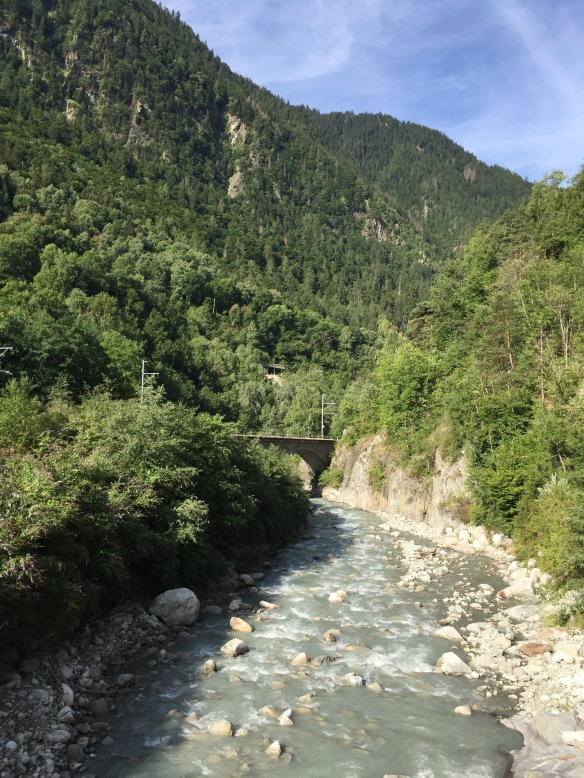 The river, from the bouncy bridge. 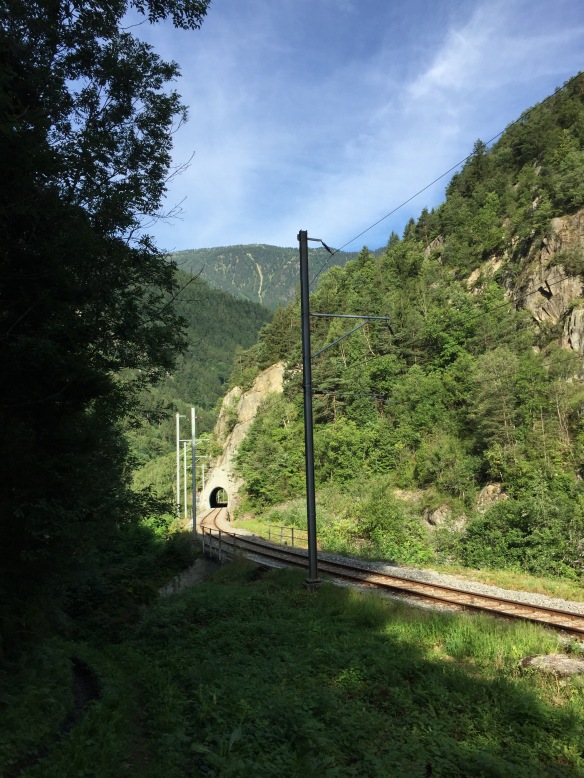 Tunnel. You knew that. 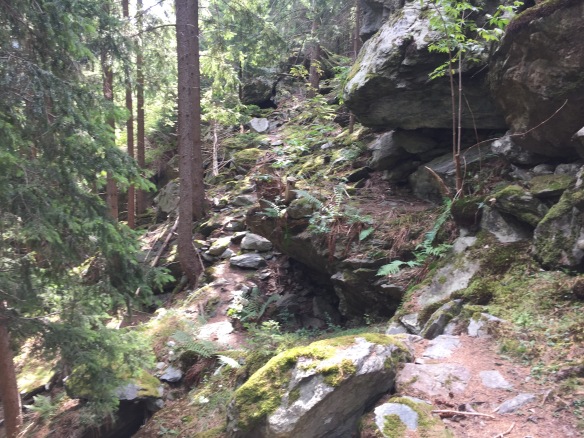 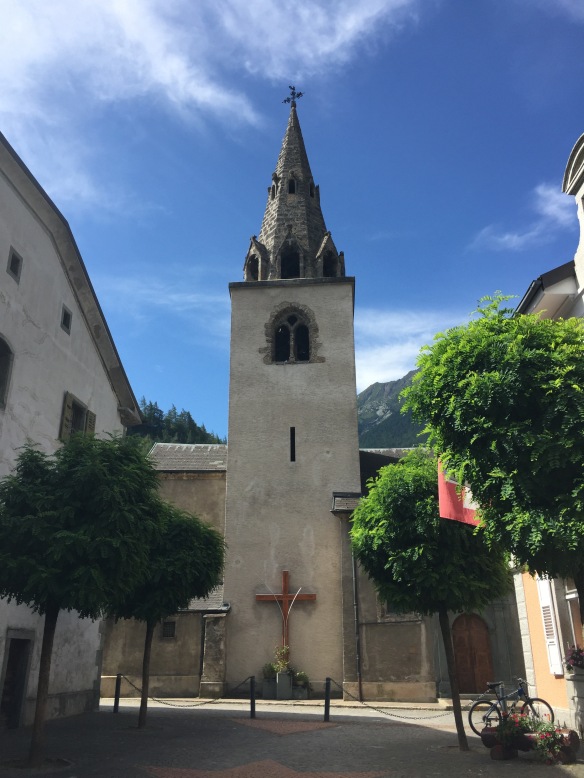 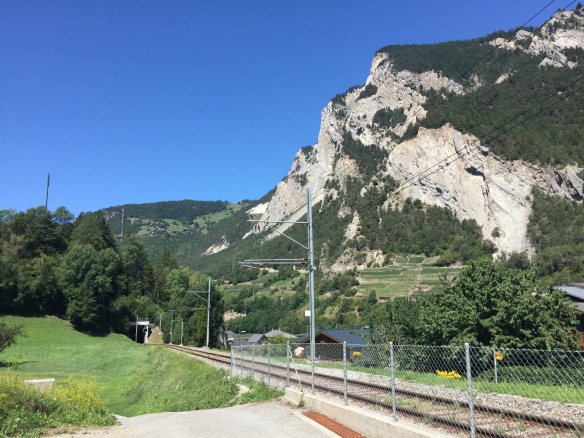 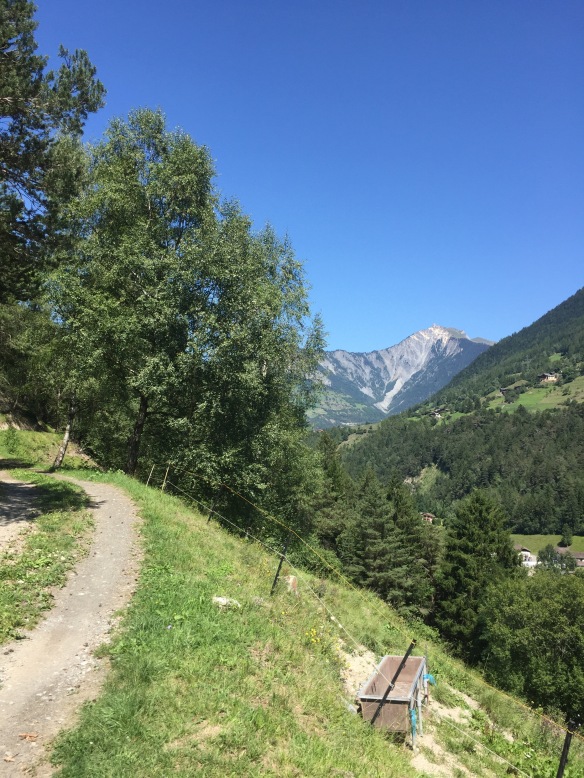 6 thoughts on “Somewhere on the line between scary and dangerous”