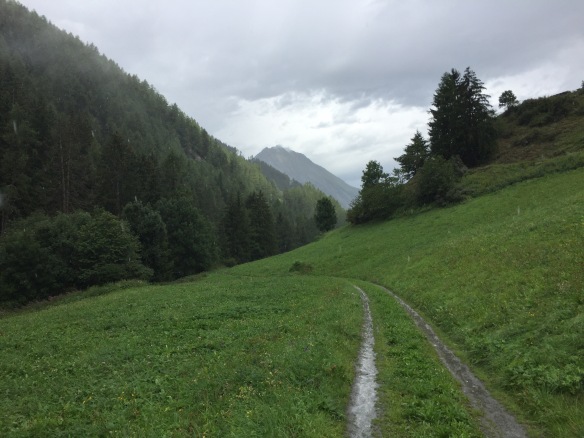 I couldn’t believe it was daylight already when I opened my eyes. Or that it was already after seven o’clock. So much for my plan of hitting the 6:10 train to Orsieres. My very optimistic goal had been to return on the earliest train to Orsieres, where I’d left off yesterday, and then walk the ten-ish miles up to Bourg St Pierre where I’d drop off my pack and continue on to the top of the pass, busing back later to Bourg St Pierre (BSP) for my overnight. With a late wake up that plan was out the window.

Actually, the plan was doomed before I slept through my sunrise/alarm clock. Without warning the weather gods had decided to open up the floodgates, so by the time I’d walked just halfway up to BSP I was already wanting to find a warm, dry place to stay the night.

I think it was actually the heavy rain that woke me this morning. The deluge, along with loud thunder, made me momentarily contemplate staying in my cozy room. Instead, after stopping at the bright and clean grocery at the Martigny station I hopped aboard the train and headed up, with one changeover at Sembrancher, to Orsieres. I secured a credential stamp at the Tourist Office, checked the GPS for the route, was thankful there was no rain here, briefly considered changing out of my stiflingly hot rain clothes, and headed up the hill. 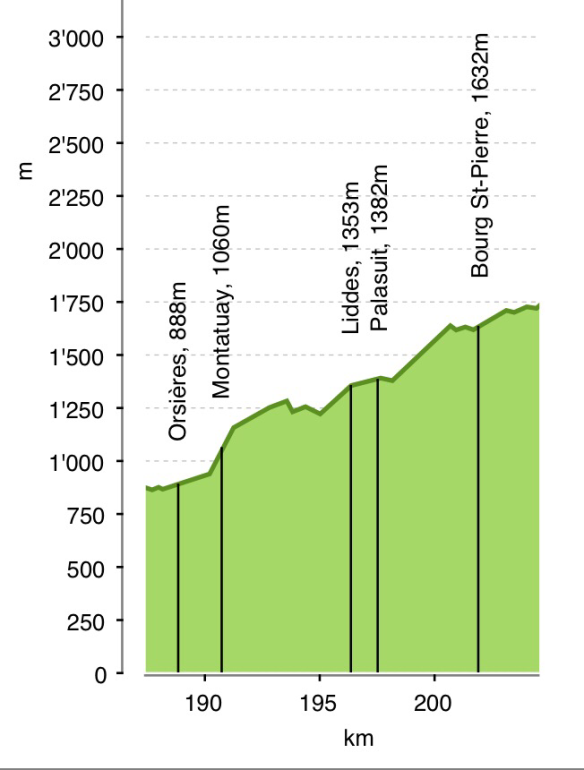 From the Swiss VF site.

When I say hill, I mean mountain. As you can see in the above chart, the walk from Orsieres to BSP ascends from 888m to 1632m, an athletic climb of 744m (2,441 feet). I’d been worrying that my rain gear would be too hot on a steep and drizzly climb, but what I got instead was a freezing downpour that, once I was drenched, kept me shivering during everything but the steepest climbs.

I pulled off my wettest gear at Dranse and ate lunch undercover on the steps of the Gite d’Etape, a hikers’ chalet partway up the climb. I shivered my way the next 2km to Liddes where I found a cozy restaurant and had a cappuccino for energy and warmth. Ursula was there, dry and happy after walking up the hill in a hastily secured garbage sack. She said hi and before she headed to the bus stop for her final ascent to BSP she taught me the French word for “wet” — mouillé — a word I look forward to forgetting.

From Liddes it was on tarmac and pasture pathways uphill, walking to the accompaniment of squishy, wet boots. One 200m stretch of path was atop a highway snowshed and the final climb snaked up a ski hill. After coming out of the ski area, shivering and drenched, I was greeted by the welcome sight of Bourg St Pierre and its Hotel Bivouac de Napoleon which celebrates that here, over 200 years ago, Napoleon Bonaparte camped on his way to Italy with 46,292 soldiers.

Hiking notes: through the day there were two sets of optional routes. I always opted for the lower choice given that the clouds and rain would negate the vistas on the higher paths. Before Dranse there was a very vertical climb up a steep hillside, but otherwise the track was mostly farm roads and grassy pathways. 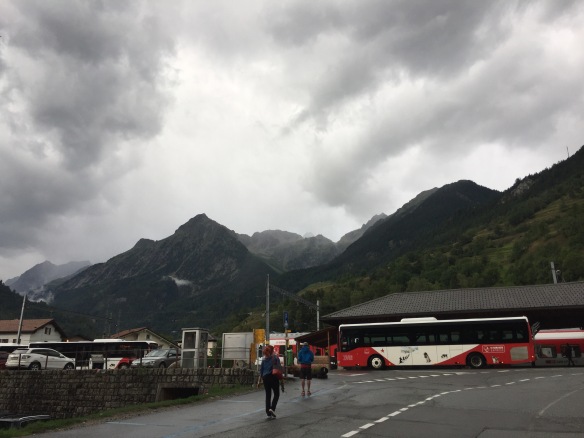 Train station at Orsieres. From here you can bus to the top of the pass. 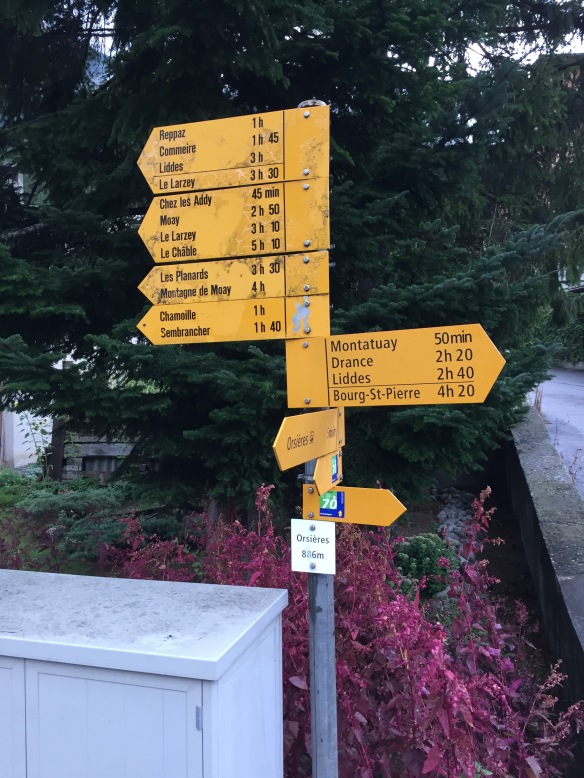 The first signposts show BSP to be 4:20 away. 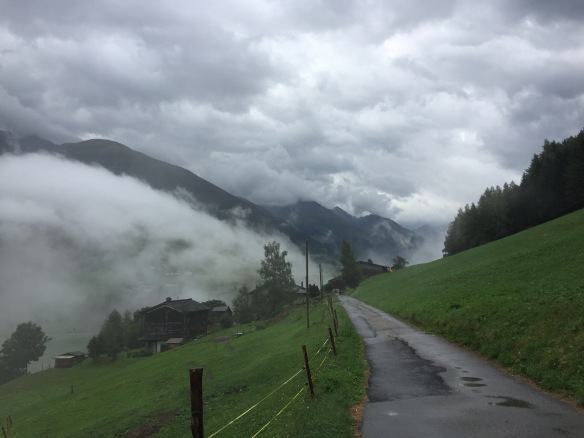 If they could speak, the cattle might warn you not to touch the white wires. Or not. 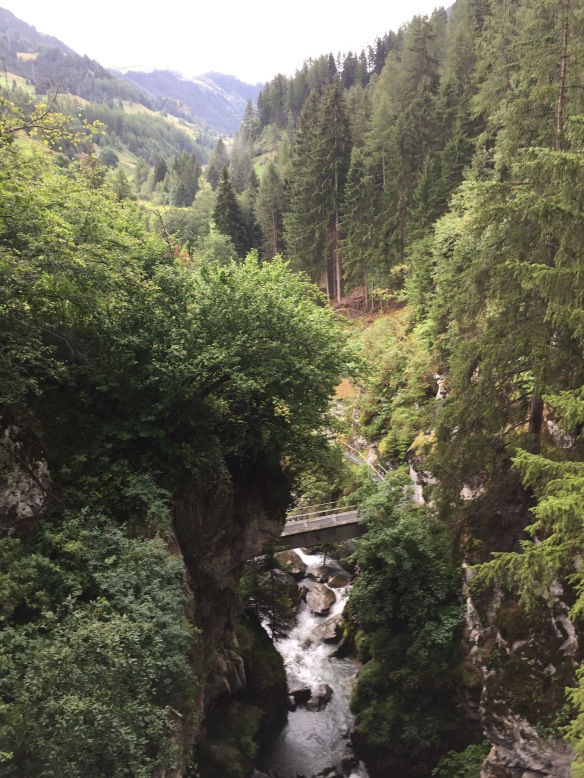 Gorge with a warning. Don’t enter the riverbed due to upstream dams unexpectedly flooding the channel. 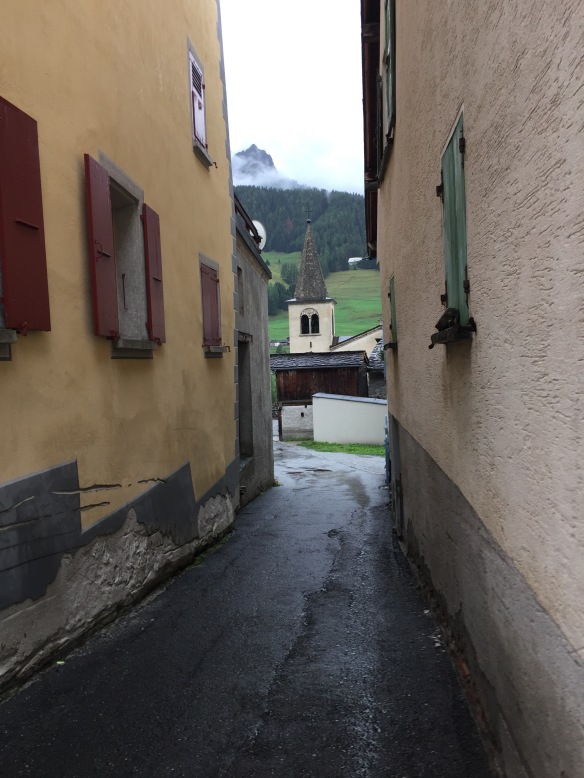 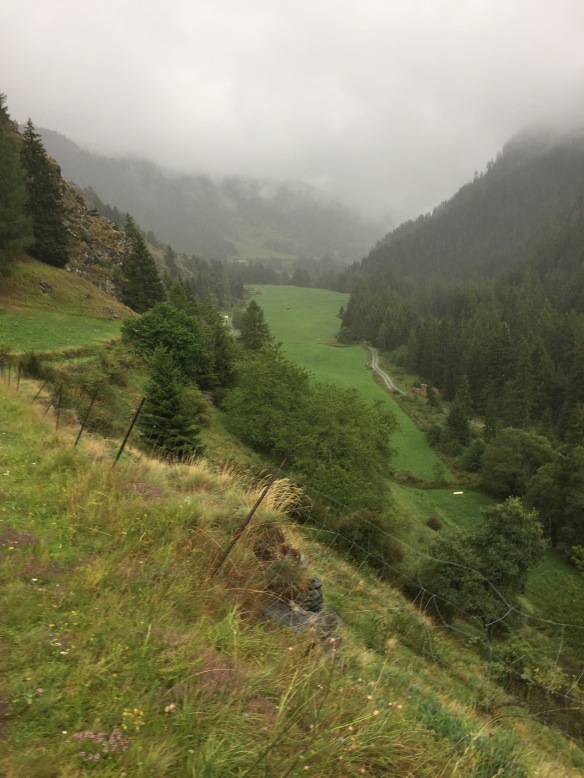 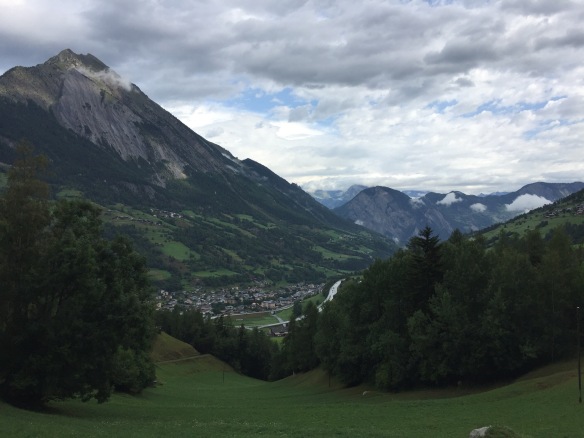 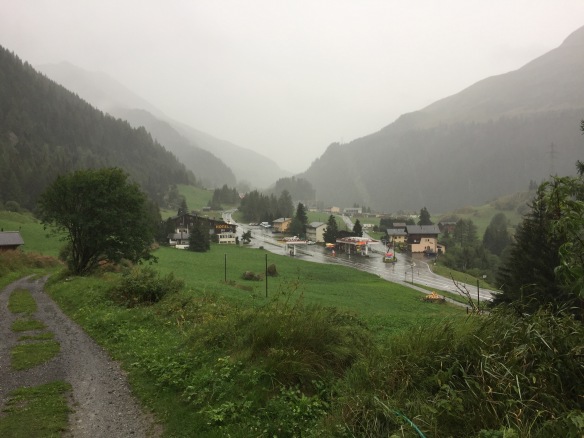 And the welcome sight of Bourg Saint Pierre.

5 thoughts on “The squishy suction sound of saturated shoes”