Day 4: Laredo to Guemes — Today, as always, the first thought of the day is “what shall I have for breakfast?” The camino variation of that for me is, “Where will I find a chocolate croissant?”

This was on both of our minds as Sebastian and I said goodbye to our roommates, Tobey and Sean of England, and headed out in the morning air. The question became increasingly urgent as we walked Laredo’s long beach and found that each cafe had only toast.

Knowing that the town of Santano was a short ferry ride from the end of the beach, we decided to tighten our belts and hope that our croissants would be waiting at a cafe on the other side of the channel.

So when we came to the ferry landing we were disappointed to learn the first ferry wouldn’t leave until 9:00, a full half hour away. We complained loudly enough that a delightful French couple (Linda and her friend) shared their bread and chocolate with us. Have I ever mentioned how much I love the French?

The ferry arrived and took us across the 300 m channel and a few blocks from the dock we found chocolate croissants, tortilla, cafe, fresh orange juice and a barkeep willing to make 2 bocadillos to go.

We walked from the cafe with Malco of Switzerland, heading through town, past a large prison, then to an option: follow the road to Guemes or climb over a tall, wooded hill and walk the beach in Noja, adding 10 km to our walk. The answer was obvious: The Beach!

We scrambled up the steep hill, were rewarded with views back to Santona, and then stood in amazement as the path turned north and the brown sand beach of Noja was revealed below us. The steep climb down was covered in no time and the next hour was filled with the sound of surf, the feel of the sun, and the cool breath of the wind coming from behind us. Sebastian took off his boots and walked in the surf while Malco and I kept our boots on to protect our tender blisters. We had a long talk about Malco’s plans for his next months of touring on his way to Brazil. At the end of the beach we found a place for lunch on a grassy and shady knoll that looks out over the length of the beach.

As we left Noja we left behind us the ocean, too, and the relaxing and cool day became a very long and hot walk through small farms in tiny towns. We arrived at Guemes’ albergue at 4:45 with Tony and Julie. The hospitalero’s water and vanilla cookies were very welcome after our hot 32.5 km march.

After a shower and hand laundry the 20 or so pilgrims adjourned to the albergue’s grassy backyard and spent the cool afternoon in quiet conversation, journalling and reading.

Along with familiar pilgrims like Tony and Julie we are getting to know Amelia of Berkeley, Lizette and Mareanne of Denmark, Julien of Quebec, Nacho of Barcelona, Florian of Amsterdam, and many other wonderful and diverse pilgrims. 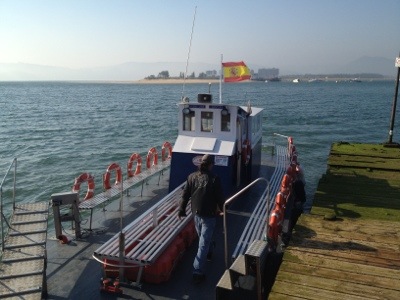 The ferry boat, unloaded at Santona. 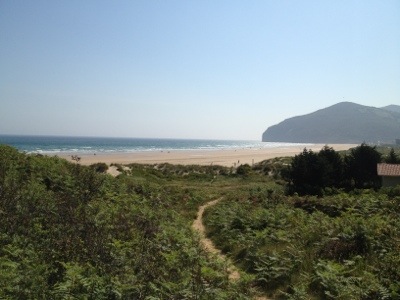 Path looking back to Snatona and its prison. 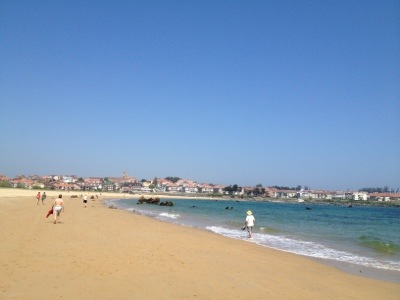 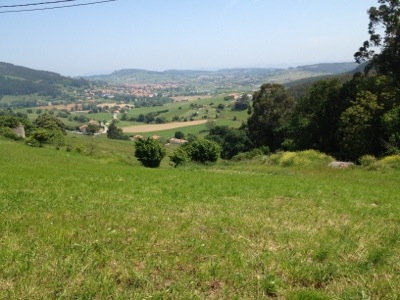 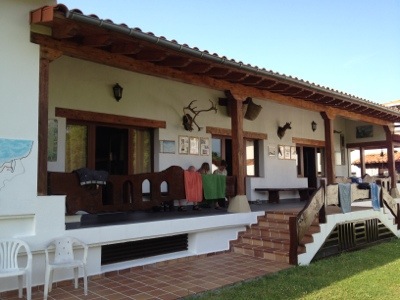 Back of albergue at Guemes. We welcomed the green and the pleasant albergue beds and showers.

Day 3 – Castro Urdiales to Laredo At the start of the day, in his unique and lovable way, Sebastian perfectly summarized the options ahead: “Pain, torture or hell?” Three options, and each is brutal.

We left the albergue at Castro Urdiales (just next to the bullfighting ring) at 7:00 and headed backwards 500 meters on the camino to a bar cafe that advertised early breakfast. After a meal of croissants, jam, orange juice and coffee we headed out to look for yellow arrows that would mark our way for 32 km to the next beachside city — Laredo.

We debated whether to follow the German guidebook up the hill to the left of the albergue or to follow the Spanish guidebook to walk along the road. Julie and Tony of Sacramento were within shouting distance and told us to follow them. We soon found arrows along the omnipresent N-634 and walked on its shoulder for several km with the ocean cliffs 100 meters below us on the right. Near the tiny town of Cedigo the locals directed us under the freeway bridge and to the right where we could see across the freeway to Julie and Tony who were still walking the former way. Our little road followed the freeway for a few more km until we crossed back under the freeway to a large campground full of tents and camper vans. At the far end of the campground we came to a nice cafe/bar where we enjoyed a conversation with two older Danish women. After they left we had a second breakfast and rested for a hour before the next stage.

From here the camino followed the road again, then returned under a tall bridge to the freeway before climbing a small hill through scattered houses and farms where we briefly met Malco of Switzerland, a dredlocked and lanky young man wearing flip flops. At the small village of La Magdelena we encountered a local who informed us in rapid Spanish that we would soon climb a large hill as he pointed out a mountain nearby with a distant TV tower at its top. We had been joined a few minutes earlier by John, a young pilgrim from Calgary, and the three of us began our ascent on a narrow, steep, gravel path. In a few, hot minutes I began to wonder why I had chosen a vacation of walking 700 km over mountainous terrain to get to a town I’d already walked to three times in the recent past. Another thought ached in my mind: could we get there quicker if we’d just stayed on the road?

When I shared my misgivings with Sebastian he responded with his memorable line: “Pain, torture, or Hell?” It was his way of pointing out that since all the options were tough, what difference does it make which one we take? So why whine about it?

With that frustratingly rational thought we continued up 10km of steep, wooded hills, sweating more with each step. Finally we arrived at the summit and began our equally difficult descent. In a shady spot where I insisted we stop and rest, Sebastian, John and I shared a nectarine and two oranges. Soon Malco and Daniel, a Scottish musician, stopped to talk.

By the time we reached the bottom of the hill it was nearly 3:00. In Llanes we found a restaurant and ordered our well earned lunch. Afterward we left John at the Llanes albergue and we walked the remaining 7 km through small farms over hill terrain to Laredo with Daniel. In Laredo we saw the two young Englishmen from last night, Sean and Tobey, and walked with them to the Buen Pastor albergue.

Though the day was long, steep and hot we were rewarded by many conversations between Sebastian and me, as well as new friendships with several pilgrims from around the world.

At the end of the day I counted to total cost of today’s ordeal: 2 blisters and a sunburn on my arms and neck. 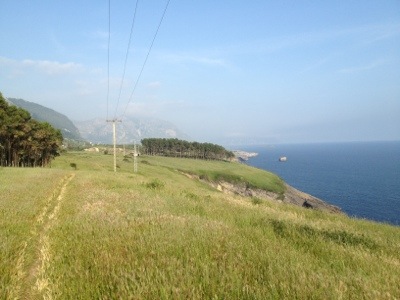 Magnificent vistas after Castro Urdiales, but look out for those mountains reaching down to the water. 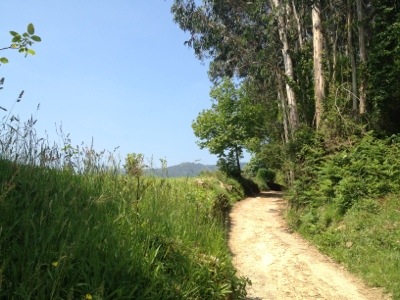 And the road starts to climb, up to a distant TV tower on the mountain beyond. 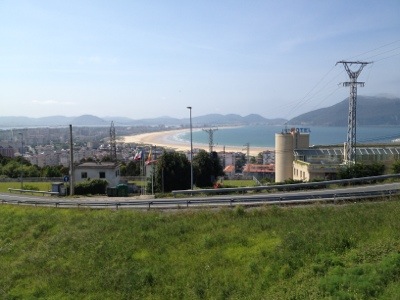 The gorgeous beachside town of Loredo where we walked into town with Daniel the Scotsman.